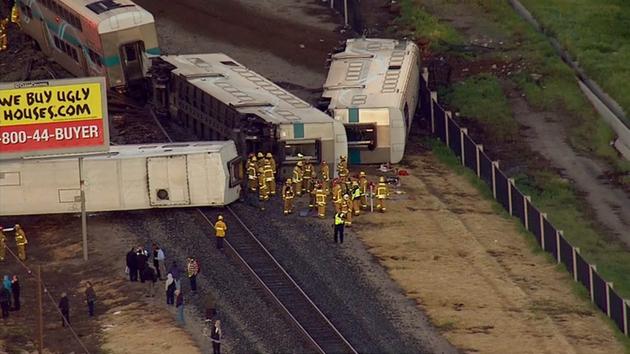 Some Observations on the Oxnard Metrolink Crash

Train wrecks are great breaking news stories for television because they are spectacular. I saw this happen first hand. I was in Dublin, Ireland at a McDonalds in the early afternoon on the 24th when it was still morning in California. A breaking live video feed was on the TV of what turned out to be the Oxnard crash. This crash became world news in no time.

It was an appalling sight. The cab car had rolled over and was parallel to the tracks after spinning 180 degrees in the opposite direction of the train’s direction. The second car was on its side on the opposite side of the tracks and perpendicular to them while the third car was on the tracks, but on its side. Only the locomotive and the fourth cars were upright. This was all caused by a pick up truck with a trailer left on the tracks. The important thing to remember is of the 51 people on board the train, while 28 were injured, only 4 had critical injuries. So far no one was has died, although the train’s operator is in the worst shape of the 4 and his survival is not assured. Cars and vans full of people often have road accidents with more critical injuries than this train accident at Oxnard.

A pick up truck is a fairly light object compared to a Metrolink train. Most of the damage and injuries were caused by the cars rolling over on their sides, not the collision with the pick up. The rolling over of the cars caused most of the passengers to tumble in the cars like clothes in a clothes dryer. Where the energy absorption improvements of the newer cars may have helped was at the tables on the trains. Many injuries in past train accidents were from people sitting at table and having their bodies slam into the tables which are firmly attached to the car. The new cars have reduced this problem. But to credit the new cars without comparing the injuries on them to the one older car on this train as saving lives seems premature and lacking supporting evidence. The fact remains that the person with the worst injuries was the operator in the cab car which was a new car designed for a Chatsworth type accident, but not this one in Oxnard.

What needs to be looked at is how to prevent injuries from derailments caused by private vehicles on the tracks. Derailments of themselves are not a bad thing. Derailments allow a train to dissipate energy to prevent destruction and injures when the train is out of control as it comes to a stop. In most cases derailments don’t cause trains to roll over and break apart from each other, such as what happened at Oxnard. We may need to design locomotives and cab cars better to handle objects on the tracks so not to rollover when derailing.

We all want better protection from accidents for rail passengers. The biggest life and death problem on the the tracks remain from people trespassing on the tracks and people making poor decisions driving across the tracks. There is no one simple solution. Great improvements have already been made, making the tracks safer. More can be done, with more money, law enforcement on the tracks and better safety education for the public..