Riding the Bus that Could have Been a Train

The Sprinter is the 22 mile Light Rail service between Oceanside and Escondido in northern San Diego County. It operates every half hour with diesel multiple unit (DMU) cars. The Sprinter stops just outside of downtown Escondido at the Escondido Transit Center. Early planning for the Sprinter called for extending it roughly 5 miles to the south mostly along an existing highway median and terminating at a major shopping mall at the south end of Escondido. However the high cost of building a new right of way to serve Cal State University San Marcos for the Sprinter ended any plans to extend the train in Escondido.

Photo by Noel T. Braymer . Click on images to enlarge. 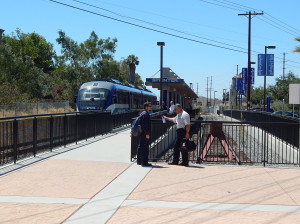 The Sprinter in Escondido

Even though Escondido is over 30 miles from downtown San Diego, the city limits of San Diego border on the southern edge of Escondido. In the last 30 years or so there has been population growth and commercial development along the I-15 freeway corridor between Escondido and San Diego. However Escondido is served by North County Transit District (NCTD) buses and trains, while the City of San Diego is serviced by the Metropolitan Transit System (MTS). With the exception of a few rush hour, premium fare express commuter buses to San Diego, there has been no direct, regular bus service connections between the Sprinter and the MTS in the last 6 years since the start up of the Sprinter. Passengers had to transfer to a NCTD bus to get to the transit center near the Mall at the south end of Escondido and transfer again to local MTS buses.

Since 2012 construction was completed on 4 new car pool lanes in a major 20 mile rebuild of the I-15 between Escondido and Mira Mesa in San Diego. As part of this project was the building of transit stations along the freeway for the use of buses on the new car pool lanes. Construction of these 4 transit stations was not finished at the same time as the car pool lanes. Finally on June 8th, 2014 the MTS began service on a new Rapid Bus service as the first direct connection to all Sprinters from Escondido to San Diego. 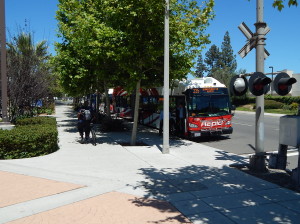 A few days after the start up of Rapid Bus 235, I tried it out. I caught the Sprinter at one of the stations in Oceanside. First issue was ticketing. There are no transfers tickets between Sprinter and MTS. After some research on-line I discovered that I could use a Regional Day pass on both the Sprinter and 235 for a seamless transfer. The Regional Day pass is good on Sprinter, all NTCD bus lines, all Trolley Lines and most MTS buses. But it is not good on MTS Rapid Express buses which are different than a Rapid Bus such as the 235. The MTS website gave instructions about loading a Day Pass on a Compass Card which would cost $2 additional dollars with the $5 dollar fare for the pass. When I bought my Day Pass on the ticket machine at the Sprinter Station I was charged $5 and given a paper ticket/pass. No doubt all this is second nature for regular riders, but very confusing to new or occasional riders.

My first question when I got to Escondido was where would the 235 be and how close would it be to the Sprinter. The 235 waiting for the Sprinter was the closest bus to the platform. This was a good sign. There driver accepted my paper Rregional Day Pass while most other passenger used their Compass Card. I don’t remember anyone putting cash in the fare box. The bus was a new 60 foot articulated one, bought for this service. There were plenty of seats available, but ridership was decent for a new service on a early afternoon. I wasn’t the only person transferring from the Sprinter.

The Sprinter is primarily a connecting service for the NCTD. The busiest stations for the Sprinter are the Transit Centers at Oceanside, Vista and Escondido as well during the school year at Palomar Community College and Cal State University San Marcos. Most of the park and ride lots have plenty of available parking with most passenger walking, bike riding or transferring by bus or train. The same will be true for Rapid Bus 235. There are now 3 transit stations in use on the I-15 used by the 235. A fourth will open later this summer.

South of the Miramar Marine Air Station the car pool lanes end and the 235 gets off the 15 to the 163. It runs for a short distance on Clairemont Mesa Blvd. and makes a few local bus stops before getting back on the 15 in regular traffic. There are a few new bus stops for the 235 at the top of I-15 off ramps at major roads that passenger can use to transfer at adjoining bus stops. The 235 does go over the Green Line of the San Diego Trolley but doesn’t have a stop to connect to it. The 235 turns west on the 94 to downtown San Diego. It stops downtown first at the City College Trolley Station. This was the most popular stop on this bus and has connections to both the Blue and Orange Trolley lines. The bus had a few more stops down Broadway which is he heart of downtown San Diego and terminated by the Santa Fe Depot. This was convenient for me to catch the Coaster back to Oceanside and transfer back home via the Sprinter. 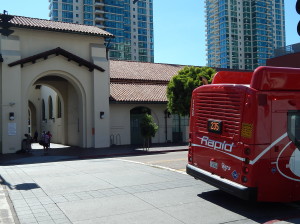 California High Speed Rail plans to use the I-15 right of way between Temecula and Mira Mesa There isn’t a median left now between Escondido and Mira Mesa so there are no easy options in this very hilly area. The total cost for my adventure was $5 for the Regional Day Pass and $2.75 for a senior discount on the Coaster for a full fare of $7.75.