You know, sometimes the old light bulb above my head doesn’t go on as quickly as it once did. You know what I mean, it used to be that I’d read or hear something and in a flash I’d figure out the agenda behind the innocuous statement. Well it took me weeks, even months, as new information dripped in, to understand the true import of PRIIA. 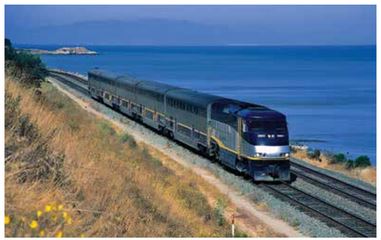 You will recall that Amtrak’s interpretation of the PRIIA 2008 legislation transfers funding responsibility of “short distance” trains from Amtrak to the states, regardless of the previous status of that train. Recall also that in California, when Amtrak was brought into being, there were three round trips between San Diego and Los Angeles, one of which was the Coast Starlight that was timetabled to and from San Diego. These trains were part of the national network, timed to connect with the transcontinental trains such as the Southwest Chief. As San Diegan trains were added under the old 403B program the three original trains became a part of that service and Amtrak made a contribution towards the total cost of the service rather than supporting specific trains.

Now I don’t want to seem as if I am being pedantic, but my definition of a national passenger rail service would be something like a series of trunk routes connecting the major population centers of the country, with intermediate stations that serve as many smaller communities as is feasible. You won’t find in that definition any reference to distance. Indeed, to me it is irrelevant whether these major population centers are 100 or 1,000 miles apart. A national network would include Boston to New York, or New York to Washington. It would also include Miami to New York, and Chicago to Los Angeles, AND Los Angeles to San Diego, or Chicago to Detroit. Each of these are major routes where there is clearly demand for modern passenger rail service.

So the question is, why does PRIIA contain an arbitrary distance criterion to delineate between national network and other short haul trains? And why is the NEC exempt from this when clearly it is a corridor (453.3 miles) shorter than the cutoff point of 750 miles. How and why have we moved away from the original concept of a National Network as Amtrak’s prime mission, to Amtrak being the owner and operator of the Northeast Corridor, the reluctant operator and apologist for the long distance trains, and a contract operator to the States for everything else?

I suggest that the PRIIA legislation was the latest in a trend going back to the 1976 transfer of ownership of the NEC to Amtrak. Thanks to Andrew Selden I have the data from the Amtrak Annual reports in the 1970s which are indicative of when the rot began to set in.

Remember that in spite of having barely enough serviceable rolling stock to run the routes that were selected for retention, Amtrak’s early management was able to use its experience to operate at a moderate deficit. That deficit tripled as soon as the NEC was absorbed and has grown ever since. But in 1978 the Carter administration instituted a review of the Amtrak system and of course the long distance trains were blamed for the deficit, and it was the long distance trains that were cut the following year.

Since that time Amtrak has continued to receive a substantial sum from the taxpayer to cover operations and capital needs. Last year at a LOSSAN Board meeting the Amtrak representative acknowledged that 95% of the capital budget was spent on the NEC. Further analysis reveals that much of the capital dollars are really spent on operating costs such as track maintenance. That is how Amtrak can pretend, against all accepted accounting principles, that the NEC makes an operating profit! I agree that the NEC is a significant provider of transportation within its region and as part of the national intercity system. The problem I have is that a majority of the capacity is provided for peak hour commuter operations, especially for New Jersey Transit into Penn Station, New York.

The Northeast Rail Service Act of 1981 instituted formulas for track access charges that amounted to a major subsidy from the federal taxpayer to these regional operators, and worse, caused the rest of the National System to be capital starved ever since.

Amtrak has done two things to disguise this imbalance in its allocation of resources.  Over the years it has consistently covered up the true nature of the costs of the NEC and its drag on the rest of the system. At the same time they demonize the long distance trains even though they continue to generate cash, higher load factors, and more passenger miles than any other segment of the business. In addition Amtrak continues to strong arm the states to find money for existing and additional service.  PRIIA is all about squeezing more money from the states which in turn is transferred to the NEC. Remember that the PRIIA legislation only required a standard formula for Amtrak’s charges to the States. Amtrak managed to convince the states that they had to abrogate the existing contracts and institute a universal increase in fees. Our best estimate is that Amtrak marks up their costs 20% so that the State corridors are now a major profit center.

But maybe Amtrak has pushed the envelope a bit too far. The humble Hoosier service between Chicago and Indiana may be the test. This train fills in the gap in the thrice weekly Cardinal service for that part of the route, but most importantly it serves as the “mule” that hauls rolling stock to and from the Amtrak shop at Beech Grove, IN. There are two arguments here. First, that as an interstate train between two major cities the Hoosier is part of the National Network. Second, since Amtrak would likely have to run this train to service Beech Grove they cannot be justified in dumping the whole cost of operation onto the State of Indiana. Indiana, pushed by rail advocates, cobbled together the funds required to keep the train running for one year. But almost immediately they issued a Request For Proposals (“RFP”) from interested parties to operate the train as private contractors, replacing Amtrak. It’s too early to say how realistic these proposals are or whether indeed the State of Indiana will show Amtrak the door. But it is a shot across the bows to an organization that is becoming increasingly out of touch with its original mission statement. The primary purpose of Amtrak was, and should still be, to operate a National System of intercity passenger trains.

What does this mean for California? I spent a lot of time last fall at Sacramento explaining the ramifications of PRIIA to our state legislature and paving the way for the additional funds that Amtrak would be requesting to run the state corridor trains. The support for the state intercity program is sufficiently strong that the funds are included in the current budget. Caltrans Division of Rail did a good job of negotiating with Amtrak, even though Amtrak refused to disclose most of the cost data that were requested. But the managers of the state corridors are far from happy with the situation. You can be sure that these officials are in contact with their opposite numbers in Indiana and other states and are watching the outcome of the Indiana RFP with great interest.

None of what I have written is in any way a reflection on Amtrak managers here in California who provide our day to day service. They do a great job with limited resources. But I believe that Amtrak in Washington DC is about to receive a rude awakening. Have the States “had enough”? Will they continue to take it? 2014 may mark a turning point in passenger rail in the USA.