Here are this month’s photos by RailPAC photographers. Click on each photo to see it full size! Contributions to this page are welcome. Send your jpeg rail photos to Russ Jackson, RailPAC Photo Editor, at info@xg1.b3e.myftpupload.com. 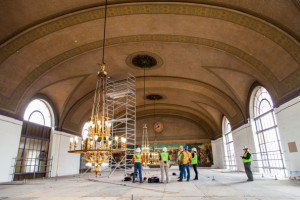 Work is underway at the Sacramento Valley Station, as experts begin to restore the historic mural. Small portions of the mural itself have been cleaned away, revealing an unexpectedly bright piece of historic artwork. (City of Sacramento caption and photo, courtesy Chuck Robuck.) 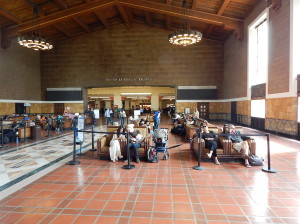 This is the main waiting room at Los Angeles Union Station on March 21, 2014. They have removed some of the seats, which will be restored. On the back wall can be seen the new arrival/departure display monitors, which will replace the large board in the tunnel entrance-way. This photo was taken standing next to the newsstand. (Photo and caption by Noel Braymer.) 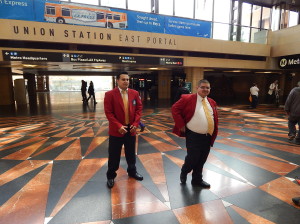 The men in the red blazers and yellow ties aare “Information Ambassadors”, but are really security guards at Los Angeles Union Station, standing in the “east portal.” These “uniforms” are supposed to make them look more friendly. (Photo by Noel Braymer.) 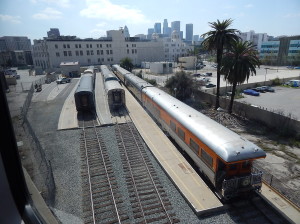 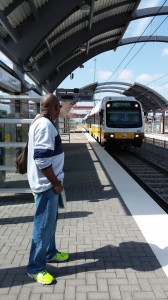 RailPAC Associate Director Anthony Lee visited the Dallas area in mid-March, and rode the DART light rail system. Here he is waiting for a Green Line train to arrive at the Trinity Mills station. DART will open its Orange Line extension to DFW Airport in August, four months early, with that station at Terminal A, providing direct service to downtown Dallas. (Russ Jackson photo.)