On March 19th, Paul Dyson represented RailPAC and NARP while testifying before the Senate Select Committee on Passenger Rail.

Chair Jackson, Honorable Senators, my name is Paul Dyson, I’m a resident of Burbank and I’m here today to represent the passenger rail advocacy groups that have played a major role since the late 1970s in realizing the state intercity network that we have today. I am also the Chair of the City of Burbank Transportation Commission and a member of the Council of the National Association of Railroad Passengers. I am a recently retired 45 year veteran of the railroad industry on both sides of the Atlantic.

Some of you will recall that in 1973 and in 1979 Americans had to line up at the pump to buy gasoline, and a number of far sighted politicians, together with The Train Riders Association of California (“TRAC”) and the Rail Passenger Association of California (“RailPAC”), realized that we had too many of our mobility eggs in the automobile basket. The consequences of our almost exclusive investment in automobiles and the highways and supporting infrastructure and services as the means of personal transportation for the vast majority were only too apparent. Not only was society dangerously dependent on a single source of transportation, but also large sections of society without access to cars, were being left behind with few alternatives.

The formation of Amtrak in 1971 left a skeletal network of passenger trains nationwide, and even these were not expected to survive the lifespan of the inherited rolling stock.

But Amtrak had, and still has a key asset, a right of access to the private sector owned common carrier railroads at a very reasonable per mile charge. Part of this residual network were the San Diegan trains, just three round trips per day, scheduled to act as feeder services to the long distance trains at Los Angeles Union Station. From these humble beginnings grew the state rail program and the intercity and commuter services that we have today.

The thinking behind the campaign for passenger rail was simple. Incremental improvements to existing facilities could provide effective transportation that was also good value for money for all taxpayers. It should also be said that the leaders of the largely unofficial coalition of lawmakers, Commissioners and advocates were completely bipartisan, with such figures as Senator James Mills of San Diego, the father of the highly successful and emulated San Diego trolley, and former police chief Senator Ed Davies working side by side to build support and organize funding for expansion of the network. Among the advocacy community were many industry professionals who were able to provide background data on which many of the early decisions were made.

We have come a long way since 1980 and as you have heard the existing services provide useful transportation to a large number of Californians. One thing I would stress that the simple head count does not convey, is that most of these passengers travel a significant distance, and so their positive impact on air quality and congestion reduction is much higher per capita than that of a short distance transit rider. A train traveler from Bakersfield to Sacramento passes through 8 counties on their 280 mile journey.

But we advocates believe that passenger rail has far greater potential than is being exploited today. Most of the railroads operated over are still single track routes with passing sidings. Theoretically you can build a schedule that allows these trains to run on time, but you sacrifice two important elements. First, journey times are extended as inevitably some trains have to wait in sidings for those in the opposite direction to pass.

Second, the service is very fragile, and subject to unreliability. It takes only a minor incident such as a door sticking or a large crowd of passengers with a lot of luggage, causing a few minutes of delay, for this to cause a chain reaction of delays for the rest of the day, so tightly are the schedules written. Thus the current services suffer a competitive disadvantage. Not only are the journey times uncompetitive but the trains have a reputation for being unreliable. While some riders may tolerate this if their journey is not time sensitive, there are many would be riders that have appointments to keep that will not take the train. 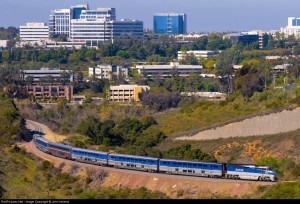 So what is to be done? Looking back over these 34 years I think it’s true to say that we have always added train service faster than we have provided adequate infrastructure for successful operations. The picture above, taken just north of San Diego, is a sample of the problem. Here we have a single track railroad on the same alignment as it was when built 100 plus years ago. In 1971 there were 6 passenger trains per day. Today there are more than forty intercity and commuter passenger trains every weekday, plus freight trains. Believe it or not this is the railroad that links the second largest and eighth largest cities of the United States in the 21st for running the trains that the service does as well as it does. In spite of their best effort, 1 in 4 intercity trains arrives late.

Now is the time to focus our attention on the tracks and signaling systems that will permit us to reduce journey times and improve on time performance. By adding second tracks to our existing routes we make the service more efficient, reducing fuel consumption and emissions. More importantly we make the service more attractive to passengers, increasing ridership and farebox recovery, and taking cars off the roads. In addition we create more capacity and improve the efficiency of our vital freight train network. And finally we create jobs. We will employ construction workers in building the tracks and bridges. We will need technicians to install signaling systems. We need folks to build the trains and locomotives, and yes we can do that here in California. And then, as construction is completed, we’ll need the operators to run the trains, and the mechanics and technicians to maintain the trains and track.

Many of the needed projects are ready for to be built. We ask two things. First, that we focus the funds that are available on construction. We‘ve done enough studies. The professional staff knows where the money needs to be spent. Second, let’s complete two or three projects that will have an impact rather than spread the money too thinly to be effective. If we want to maintain public support for passenger rail we need to deliver something tangible, and deliver it soon.

Thank you for the opportunity to testify here today. Our groups truly appreciate the dedication of everyone here to improving mobility and the quality of life for the people of California.