Why California,Nevada and Arizona are the best places for High Speed Rail

This isn’t just my opinion. The Brooking Institute, a Washington based “Think Tank” came to this conclusion in a paper it released in October 2009. This paper is titled“Expect Delays: An Analysis of Air Travel Trends in the United States” by Adie Tomer and Robert Puentes. Looking at air corridors under 500 miles that carried the most people that could be handled by High Speed Trains as quickly as by air, the Brooking Institute found the top three air corridors for High Speed Rail were Los Angeles to San Francisco, Los Angeles to Las Vegas and Los Angeles to Phoenix. This didn’t count air travel from Los Angeles to San Jose or Sacramento or air travel from San Diego to San Francisco, San Jose, Sacramento, Las Vegas or Phoenix which would add millions more passengers.

All graphics from Brookings Institute. Click to enlarge image

This report from the Brooking Institute looked at air traffic around the country and showed that it was concentrated at a few major metropolitan areas. It also noted that air traffic between major cities less than 500 miles apart was particularly heavy with almost half of all take offs and landings limited to just the top 26 major metropolitan areas. This report looked at total air traffic between regions not just between airports. JFK Airport in New York is only the 6th busiest airport in the country. But when combining traffic at all of the airports in the New York City Metro area, 6 of the 10 air corridors with the greatest passenger loads in the US are to and from the New York City region. 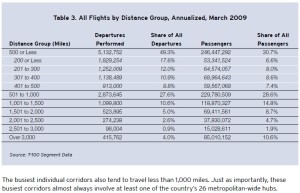 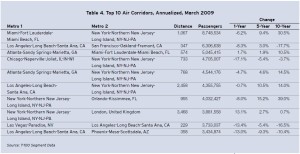 Currently the Federal Railroad Administration and Amtrak are planning a 220 mile per hour rail service between Washington, New York and Boston. The price tag for this project now is $150 billion dollars. This is a reasonable estimate because construction of High Speed Rail in an urban area is very expensive. A mostly new railroad and alignment would be needed requiring much tunneling and elevated structures to travel at high speeds in a densely populated area like the Northeast. The existing railroad on the Northeast Corridor would still be needed for heavy commuter rail traffic which is much greater than current intercity rail passenger service. Is this the best use of limited funding for rail passenger service in this country?

If we look at the proposed Los Angeles area to Las Vegas High Speed Rail service we can see the construction costs are much lower. Estimates now are for roughly $7 billion dollars for 185 miles of high speed track built on I-15 between Las Vegas and Victorville. A significant reason for the lower cost for the Las Vegas project is the plan to use an existing publicly owned right of way on the I-15 freeway. There are almost no new environmental impacts nor is private land needed to be condemned by using an existing public right of way. There are plans to use the right of way of a planned freeway between Victorville and Palmdale. From Palmdale, Las Vegas High Speed Trains would used improved tracks also being planned for California High Speed Trains to get to the Los Angeles basin.

Could much the same thing be done between Los Angeles and Phoenix? Getting as far as San Bernardino on existing tracks isn’t much of a problem. If we are able to to use the I-10 freeway for a High Speed Rail right of way east of San Bernardino we can also have service to the Palm Springs area, Phoenix and Tuscon which is also a major market. High Speed Trains have higher horsepower to take steeper grades than conventional rail such as those on freeways. In many cases countries build High Speed Rail and highways together sharing the right of way.

The basic difference between West Coast and East Coast High Speed Rail is passenger miles and construction costs. As a system connecting Southern California to the Bay Area, Las Vegas and Phoenix/Tuscon is a much larger market than Washington-New York- Boston in terms of passenger miles. Washington to Boston is 407 air miles. Los Angeles to San Francisco is 347 air miles, Las Vegas is 229 air miles and Phoenix is 358 air miles. That is 933 air miles versus 407 or over twice as many on the West Coast versus the Northeast. Plus using Los Angeles as a rail hub opens up many more travel markets by rail with markets like Phoenix to Fresno and San Jose to Las Vegas and so on. Since revenue for all passenger services is based on passenger miles, High Speed Rail service hubbing out of Los Angeles will by nature have more markets and longer average distances, lower construction costs and better revenue potential than the Northeast.

What are the strongest under served markets on the East Coast for passenger rail? Using current air travel as a guide they would be New York to Florida and Chicago. Historically New York to Chicago was a major rail passenger corridor. Amtrak currently has only 2 daily trains today to Miami. New York to Miami is the largest air market in the country as of 2009 and New York to Orlando is 7th. Much of the appeal of busy air corridors is economy. The air corridors like New York to Florida and from Los Angeles to San Francisco, Las Vegas and Phoenix took off largely because of low fares. Speed has a value, but passengers are looking for the best value which is a combination of price, speed and comfort. Rail service can go faster than now, but at less than High Speed Rail speeds and compete on price and comfort in many travel markets, particularly on the East Coast and to the Midwest. Expending rail passenger service from the Northeast to the South and Midwest will expand passenger miles which will have a greater impact on revenues than appealing to the same customers to travel more often on the Northeast with faster trains.