Here are 5 photos by RailPAC photographers. Click on each photo to see it full size! Contributions to this page are welcome. Send your jpg rail photos to RailPAC Photo Editor, at info@xg1.b3e.myftpupload.com. THIS MONTH: Texas, New Mexico, and Arizona 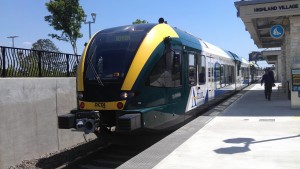 The Denton County, Texas, A-Train, diesel-powered commuter trains travel between Denton and the Dallas DART transfer station in North Carrollton. This train is at the Highland Village-Lewisville Lake station, midway between the two stations and where the northbound and southbound trains meet on the single track ex-MKT line. The line carries over 2,000 riders daily and has Saturday service. (Photo by Russ Jackson) 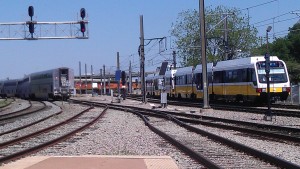 It’s “Earth Day” April 22, 2013, at Dallas Union Station. On the left, the on-time Amtrak Texas Eagle has departed for Ft. Worth, but is held for a Union Pacific inbound freight to clear, while on the right a DART light rail Blue Line train is arriving at the station. In the distance a BNSF freight train waits for Amtrak to clear the junction. (Photo by Russ Jackson) 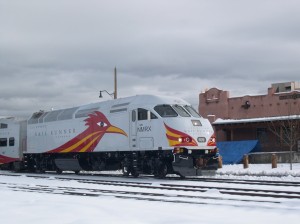 From the RailPAC Archives. A New Mexico Railrunner train has just arrived at the Santa Fe Station on a snowy day in the winter of 2009. Despite financial problems, the Railrunner continues to carry passengers between Santa Fe and Belen, with stops along the way including the historic Albuquerque train station. Check the RailPAC Archives in the column to the right on this page! (Photo by Bob Snow) 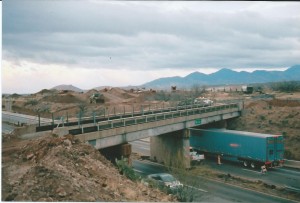 In 2012 the Union Pacific and the State of Arizona completed a realignment of the former SP line east of Tucson, AZ, so it would parallel rather than cross Interstate 10 near Mescal. Shown here is the old railroad bridge. In the distance is a string of grain cars that are now stored on the former line, which is accessible only from the east end. (Photo by Richard Strandberg) 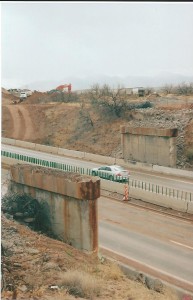 This is the same location as photo 4, AFTER the rail bridge was demolished on March 8, 2013. Interstate 10 will be re-built, also, with a long bridge crossing Cienega Wash. The realigned UP tracks are in service. The reason for the removal of the rail bridge was primarily because the clearance under it was too low for some modern interstate trucks. (Photo by Richard Strandberg)