LA doesn’t have Regional Rail with Airport Connections, but needs it

A recent international survey of air travelers by Skytrax rated the airports of the world. No American airport rated higher than 25th. LAX rated 109th out of 395 airports world wide. According to a story in the May 5, 2013 Los Angeles Times “What’s Wrong with Los Angeles International Airport? “ this article reports “Seating at the airport is limited, security staff are rude, signage is poor, bathrooms are in poor condition and travel between terminals is difficult and confusing”, according to Donna McSherry, who operates The Budget Travelers’ Guide to Sleeping in Airports website, which rates LAX among the world’s 10 worst.” This Times article also reports “LAX could climb the ranking, she said, by improving its signage, cleanliness, ambience and connections to mass transit. “International travelers really value having that direct connection with rail or bus service,” said Cheryl Marcell, a spokeswoman for ACI World, the trade group for the world’s airports.”

This sounds like good advice for any transportation service.

Recently I was in Los Angeles taking pictures of some the many rail transit projects that are under construction. While near LAX to check out part of the the route of the future Crenshaw Light Rail Line I went to visit my old neighborhood where I had lived for over 10 years. When I got there it was gone. Almost the entire block was now a large vacant lot all owned by LAX. It isn’t just my old block but many blocks around LAX are being steadily bought by the airport and the housing removed. 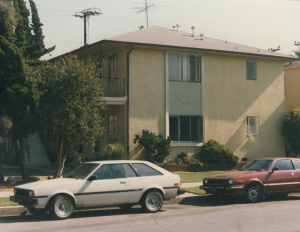 My old apartment near LAX in 1987. It was modest but comfortable, convenient and affordable . Click on any photos to enlarge view. 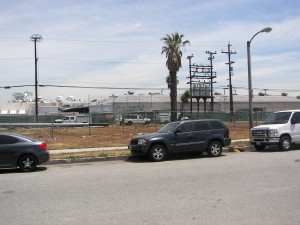 This is the view of where my old apartment use to be today. The only landmark left is the power pole in the back.

I lived in or near the Westchester neighborhood of Los Angeles from 1970 to 1988. Like many areas of California it saw rapid population growth and housing construction after World War II through the 1960’s. In the 1950’s the terminals of LAX where a mile further south than today on Imperial Highway and the Airport only had 2 runways south of Century Blvd. This changed in the 1960’s when new terminals were built a mile further north at Century Blvd and then 2 additional runways built north of Century Blvd. With the new runways the process of tearing up Westchester began. 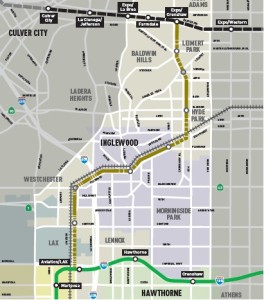 The main reason for my visit to Westchester was to check out early construction of the Crenshaw Light Rail Line near LAX. Utility relocation work has started on the project which will run 8.5 miles south/north from a joint Green Line Station at Imperial Highway to the Crenshaw Blvd Expo Line Station. At Century and Aviation Blvds the Crenshaw and Green Lines will share a station next to LAX which will likely have a connection by People Mover to the LAX Terminals a mile away. The Crenshaw Line will use the old ATSF Harbor Line from Imperial Highway to Crenshaw Blvd at the northeast edge of Inglewood. 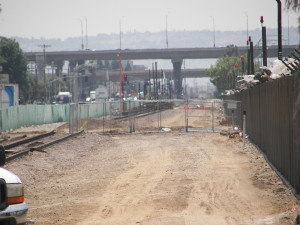 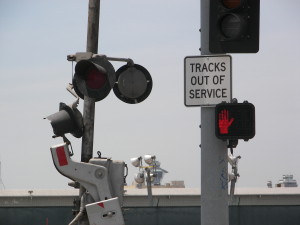 The ATSF Harbor Line is out of service. All the grade crossing like this one are now decommissioned

The old ATSF Harbor Line is now out of service.  Along the east edge of the south runways the light rail tracks will be put in a covered trench on the Harbor Line Right of Way. At Century Blvd there is a viaduct for the Harbor Line. The  new light rail station at Century will be elevated where the People Mover will connect with light rail at that site. It is likely that the People Mover will be all elevated. At the Imperial Highway Station a mile away the trains will come out of their trench and climb back up to the elevated level of that existing station. 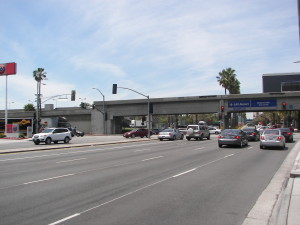 LAX is now in the middle of a $4.76 Billion Dollar overhaul. Part of this project is to enlarge terminals and rebuild runways to allow larger planes to use the airport. This is also being done to reduce the chance of collision on the ground and with planes landing or taking off. Much of this construction for LAX is opposed by the residents of Westchester and the cities around LAX. They want a cap on future growth at LAX and reduction of air and road traffic congestion in the local area.

Towards this end the Mayor of Los Angeles with broad public support has ordered LAWA, the city agency in control of LAX to transfer some air traffic to other regional airports from LAX. Since this order LAX has seen slow growth while the other regional airports have seen major declines in air traffic. The cost of air travel is directly connected to the cost of of fuel. The slow economy and rising fuel costs are why people are flying less. There is plenty of unused capacity at the other airports at communities which want more airport business. Ontario has seen traffic drop during the time LAX was suppose to shift traffic to other airports. The airport at Palmdale doesn’t have any airlines at the moment. These two airports are owned and controlled by LAWA, the same LA City Department that owns and operates LAX.

The planned Crenshaw/Green Lines rail services won’t attract many airline passengers. Transit Rail is not the best way to travel with luggage. Light Rail will be great for the many people who work at or near the airport. But neither the Green or Crenshaw Lines serve downtown Los Angeles or LAUS. For people who fly out of LAX from all over Southern California or traveling to areas outside of Los Angeles few will be able to take Light Rail without several transfers to and from where the are going. As for Ontario Airport there are long range plans to extend the Gold Line from LAUS to that airport. That will be a long 37 mile ride on Light Rail and won’t connect to many places in Southern California where people fly to or from. Bob Hope Airport in Burbank will have 2 train stations on different rail lines for future High Speed Rail, Metrolink and Amtrak. There are plans to serve Palmdale Airport in the future with both Metrolink and High Speed Rail. But there are no plans to create a unified rail passenger network to connect the entire region and serve the airports with fast, comfortable passenger trains. With the loss of the old Harbor Line by LAX for just Light Rail, connecting LAX by regional rail to the rest of Southern California will now be very expensive.

How expensive? London, England is now spending 15 billion Pounds (23.36 billion dollars) to connect 2 rail lines in central London as a continuous 73 mile service west to east from Maidenhead to Shenfield. What makes this project called Crossrail so expensive is 13 miles of tunneling mostly in central London. This will also include a tunnel to connect Heathrow Airport to Crossrail. Heathrow already has transit rail connections on the London Underground. When finished by 2018, 24 trains an hour in both directions with 10 car trains for up to 1,500 passengers each will run on Crossrail. 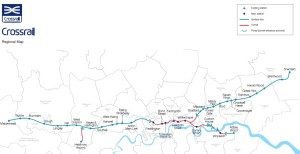 The official map of the Crossrail project now under construction in London The lines in red shows new tunneling. Click on  drawing to enlarge.

At the Farringdon Station in central London the Crossrail Line will connect with Thameslink. Thameslink is much like Crossrail only it runs 140 miles north-south of London from Bedford to Brighton. It too runs underground in London to provide direct service north and south of the city. It first opened in 1988 and by 1998 was overcrowded. In the north Thameslinks serves London Luton Airport and in the south of London, London Gatwick Airport. There is now a 5.5 billion Pound ($8.56 billion dollar) upgrade to Thameslink scheduled to be completed also by 2018 to add more stations and increase the line’s capacity to handle current and future growth.

With the ability to transfer between Crossrail and Thameslink to 3 major London area airports and at major central London trains stations with Underground connections travelers to or from the London area can travel by rail to most of greater London. There is also a fourth airport, London Stansted which has rail service which will connect to Crossrail at Liverpool Street Station in central London. But London is a big city. The greater London area beyond the city has 13.7 million people. By comparison the population of greater Los Angeles is 18 million. With future run-through tracks at Union Station and upgrades to existing rail rights of way for direct service to LAX and Ontario combined with connecting existing rail lines on Metrolink we can accomplish what London is doing now at a fraction of the cost. But for want of foresight the costs of doing this will continue to grow as will traffic congestion.