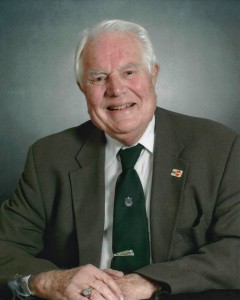 On Sunday, December 4, Arthur Lloyd left this world with dignity and grace, surrounded by his children, grandchildren and caregivers in the living room of his home in Menlo Park. He was a powerful presence in our lives even as a series of strokes diminished his ability to move around and communicate. To the end, he expressed love for his family and gratitude for his care.

A sixth-generation Californian, Arthur was born and raised in San Francisco. When Arthur was about to start his sophomore year at the newly-opened Lincoln High School, his father moved his dental practice from downtown San Francisco to Napa. Dismayed by life in what was then a sleepy small town, Arthur accelerated his high school career by taking courses at the local community college, allowing him to matriculate at U.C. Berkeley in 1942, at the age of 17. Not long after his 18th birthday, he enlisted in the army and was sent to Fort Benning, GA, for basic training, and then to Fort Leonard Wood in Missouri, where he served in the Medical Corps until the war ended in 1945.Read More »Arturo Leonard Lloyd, Jr. 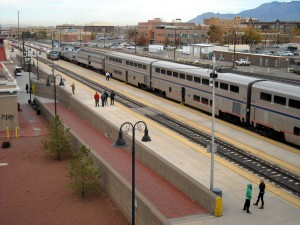 During this past Thanksgiving holiday I had a privilege to a ride on the eastbound Roughwest Chief, from Los Angeles to Chicago… I’ve traveled on the Chief before, and it seemed to be fine. However, this past trip will probably be my last.Read More »Thanksgiving Ride on Train 4, the “Roughwest Chief”

Written by William C. Vantuono, Editor-in-Chief, Railway Age The House Transportation & Infrastructure Committee has released H.R. 3763, the Surface Transportation Reauthorization and Reform Act of 2015, commonly referred to as the “highway bill.” Buried… Read More »PTC: “It ain’t over till it’s over”

Although Amtrak will not be sponsoring National Train Day this year RailPAC, together with a number of local groups, is continuing the tradition at Santa Barbara.  Train Day will take place Saturday May 9th at the historic… Read More »Santa Barbara Train Day

Portland, ME – March 6, 2015 – “It is a sad day when the federal agency which administers federal funding for Amtrak, and who has played such a critical role in providing grants to States to help develop and improve intercity passenger rail services, also is determined to require States and intercity passenger service sponsors who contract with Amtrak to become railroads” observed Patricia Quinn, Chair of the States for Passenger Rail Coalition, Inc. (S4PRC) and Executive Director of the Northern New England Passenger Rail Authority (NNEPRA).Read More »States for Passenger Rail Coalition Comments on Indiana’s Decision to Stop Sponsoring the Hoosier State

Amtrak Statement in Response to the Hoosier Announcement

Indiana is fighting back against the FRA ruling, which is excellent news.  The whole idea of the ruling is ridiculous.  If a State hires a qualified operator to do a job it should not have to become certified to do the job itself.  Boardman is again trying to use PRIIA and now the FRA to force the states into paying their monopoly pricing for service.  This will not win him any friends outside the NEC.  – Paul DysonRead More »Amtrak Statement in Response to the Hoosier Announcement

RailPAC is still gathering information about new proposed rulings by the Federal Railroad Administration which would appear to have a profound effect on State rail programs.  This has the hallmarks of a Washington DC power play involving FRA, Amtrak and others to ensure that the states do not use non-Amtrak operators.  However, the burden placed on the states, including states like Texas and California that cannot be railroads for legal reasons, may well backfire on the proponents and cause the Congress to take action on this.
Check railpac.org and our social media for regular updates.