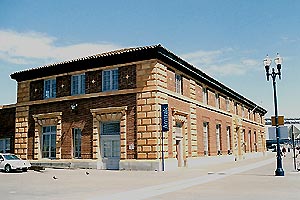 Effective Sunday, March 1, 2015, five Amtrak Routes (Pacific Surfliner, San Joaquin, Capitol Corridor, California Zephyr, and Coast Starlight) will be affected by stop and schedule changes in San Francisco, California due to the relocation of the staffed Amtrak ticket office from 101 The Embarcadero (Ferry Building) to 200 Folsom Street (San Francisco Temporary TransBay Terminal). The Amtrak computer program “Arrow” should have this information updated for Amtrak Guests booking new reservations sometime during the day on Friday leading into the Presidents’ Day Weekend. Due to upcoming system updates, Amtrak Guests traveling to/from San Francisco, California on and after March 1st should wait to book their travel until at least Valentine’s Day or Presidents’ Day. Staff at Amtrak Bus Operations have emailed me saying that “SFC” will remain the Amtrak three-letter station/stop code, even after the move takes place.

For the remainder of February, 101 The Embarcadero (Ferry Building) will continue to be the Amtrak ticket Office. Based on the information I have received to date, the first Amtrak service that will serve the new “SFC” stop at 200 Folsom Street will be Southbound 3402 at 4:50 am. This is a bus to the Stockton ACE Station for passengers traveling to San Joaquin Valley Destinations. Northbound Pacific Surfliner Bus 4785 that actually departs Santa Barbara on Saturday, February 28th at 9:55 pm, arriving March 1st at 5:35 am in San Francisco will be the first arriving bus. This bus will continue onto Emeryville with a final destination of Oakland Jack London Square.

Printed timetables showing this as well as other changes across the country will be available at stations throughout the Amtrak System later on in March. Prior to the end of February, both Amtrak.com and CapitolCorridor.org should have detailed news about the San Francisco changes.

The 200 Folsom Street address is a separate building at the far end of the Temporary Transbay Terminal that serves as the Greyhound station. I have not been there recently, but I remember that in the past, Greyhound Security only allowed ticketed passengers to access the waiting room and restrooms. It’s 3 blocks between Folsom Street and Market Street to get to/from a BART station. The rest of the Temporary Transbay Terminal spans the whole block and is mostly a huge bus staging lot with loading lanes.

Since the station code remains “SFC”, passengers should be able to continue purchasing tickets in February for travel in March or beyond, without experiencing any computer difficulties. It might be possible for .”Ferry Building” to still be printed on a ticket, but for travel after 2/28, the system would automatically recognize that it really meant “Transbay Terminal”. Since Amtrak uses dynamic pricing (as certain travel dates become popular, those tickets will cost more), it may be to a passenger’s advantage to not delay ticketing, so that they can avoid any subsequent price increases.

The new Amtrak location would represent a return to the station’s previous roots. Prior to being located at the Ferry Building, it was inside the old Transbay Terminal. The bus lines (including AC Transit and Greyhound) are currently operating at this temporary facility while the permanent building is being constructed. A number of SF Muni bus lines also serve the Temporary Transbay Terminal.

If the Thruway buses are also able to use the Financial District stop, it would be right at the Embarcadero BART station, saving the 3 block walk to reach BART. This stop had sometimes been suspended in the past, during periods of heavy construction, but is in a very convenient location very close to the Ferry Building and Embarcadero Center.