A lawsuit against the $219 Billion dollar San Diego County Transportation Plan up to 2050 was upheld in a State Appeals court last November. The lawsuit is based on the fact that the current transportation plan doesn’t meet the State’s target for reducing Greenhouse Gases by 2050. The State’s goal is to reduce Greenhouse Gases below 1990 levels by 2050. The transportation plan for San Diego County assumes increases in Greenhouse Gas Emissions by 2050 from increased road traffic. The point of the lawsuit is to force San Diego and other counties in California to switch spending from new highway construction to increased spending for more rail and transit service. 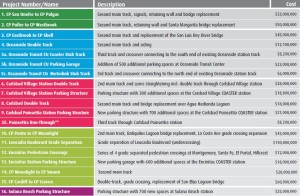 San Diego County graphic of some of the rail project planned. Click image to enlarge.

The most expensive and difficult projects will be the last to be built and funded. There are plans to build a new 2 mile double track alignment in the canyon area at Miramar which is now single tracked and has 25 mile per hour speeds. This new double tracked alignment will raise speed to around 45 miles per hour. The one segment there are no plans to double track is on the seaside cliffs of Del Mar and the nearby wetlands of Los Penasquitos Lagoon. The long term plan is to build a billion dollar plus double tracked high speed tunnel from Del Mar to bypass the cliffs and wetlands after 2040.

There is another long term billion dollar plus project proposed to bypass the canyon running in Miramar by building a 1.7 mile tunnel for a faster and shorter route along I-5 with a station at University Towne Centre (UTC). The UTC area is the largest employment center (bigger than downtown) in San Diego. A station at UTC would have connections to the San Diego Trolley which will serve UTC and the nearby University of California, San Diego. 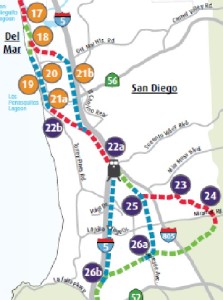 San Diego County graphic. View of the current route at Del Mar and the proposed tunnel along the freeway. Also show is the roundabout route at Miramar and the tunnel shortcut by the I-5. Click image to enlarge.

To greatly increase rail ridership and reduce Greenhouse Gas emissions by 2050, will require faster, more frequent trains serving more stations in the County with major land development around all of the stations. This will require electrification to reduce Green House Emissions and for faster train speeds. Additional triple tracking will also be needed to allow faster express trains to pass slower local trains.

As it stands now, there are already plans to add more stations in San Diego County. These include for event use only at the Del Mar Fairgounds, a station downtown by the Convention Center/Petco Baseball Park, as well as in Camp Pendleton and by the Airport. There has been discussion in the past of extending service south of downtown to National City. Expanding local service with even more stations is a possibility.

To make this work will require a coordinated schedule for easy transfers between local, regional,intercity, express and high speed rail to carry people from their origin to their destination. There will need to be major changes at the stations. A major factor today in ridership at a train station is dependent on the amount of parking. To increase ridership to the levels needed to reduce Greenhouse Gases can’t be done by building more parking. That will be too expensive and make traffic around the stations worse. Instead development at and near the stations is needed with better access to the stations by foot, bike, buses and rail too.

The problem won’t be finding developers for new projects at the stations. it will be overcoming local homeowner opposition from fear that greater density will create more auto traffic. The development at and near the stations will require more housing as well as services and stores to encourage walking and reduce the need for driving. Work places need to also be built near stations so more people can commute by rail to work.

Also needed are expanded connecting train and bus service as well as the need to encourage more bike riding. There are plans to double track and expand the Sprinter Light Rail service between Oceanside and Escondido (future High Speed Rail Station) for more trains and express trains.

If we make these improvements in San Diego County with new high speed tunnels and full double tracking and electrification, we should do the same all the way to at least Los Angeles. The corridor between Los Angeles and San Diego is the busiest in Southern California. The changes outlined here for San Diego County also apply for Orange and Los Angeles Counties. The area most in need of improvement is in south Orange County. A high speed billion dollar plus tunnel is needed in San Clemente to reduce the running times, eliminate a major delays and increase track capacity for more local and express trains. Building tunnels in San Diego and Orange Counties, raising speeds up to 110 miles per hour and adding electrification can reduce running times for some trains between San Diego and Los Angeles from 2 hours 45 minutes or so to well under 2 hours!

To build a fast, high capacity railroad just in San Diego County by say 2030 with tunnels and all the improvements now planned is estimated to cost around 3 billion dollars. Electrification is now budgeted at 1.5 billion dollars for 50 miles for Caltrain in the Bay Area. To build a first class rail passenger service just in San Diego County could cost up to 5 billion dollars. That’s a lot of money, even spread out over the next 15 to 20 years. But this should be seen in the context of San Diego’s Transportation plan which calls for spending 219 Billion dollars by 2050. Granted not even that 219 Billion dollars has been found yet. But the fact is transportation is a major expense, as well as critical to a modern society.

San Diego County graphic of the projects planned up to 2050 for rail in the county. Click image to enlarge.

Improving rail transportation will improve the local economy and will pay for itself in the long run. It will reduce transportation costs and build more affordable housing for many. The development around stations with improved rail services can reduce road traffic congestion. If California is serious about reducing Greenhouse Gases, more rail service and electrification with power from renewable sources will be needed, not more road traffic.