California now has some connections by rail at its airports. This will improve over the next 10 to 20 years. The two airports now with the best rail connections are San Francisco International Airport (SFO) and Bob Hope Airport in Burbank near downtown Los Angeles..

SFO has direct and regular service from BART and connections via BART to Caltrain at Millbrae. The alignment used for this has left BART with a stub end track at the International Terminal of SFO. Because of the stub end track which reduces track capacity of  BART trains to SFO . The connection to SFO from Caltrain is slow and expensive 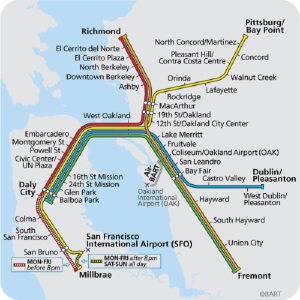 BART system Map
Click on all images to enlarge

The original plan was for a much cheaper connection to BART with the SFO People Mover for a joint BART/Caltrain station in San Bruno which is near the People Mover’s terminal at the Rental Car Center for SFO. This would have allowed all BART and Caltrain trains to connect to all the terminals at the airport, not just the International Terminal. But the decision to extend BART into the airport at great expense was a political decision. After a slow start, ridership to the airport on BART has grown and is an economical alternative to driving and paying for parking at the airport. SFO will also be getting a High Speed Rail connection by 2029. 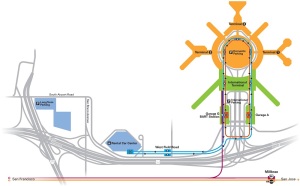 For several years there has been a train station at Bob Hope Airport which is a short 10 minute walk from the terminalshttps://railpac.org/wp-admin/post.php?post=10558&action=edit&message=10. The station is served by Metrolink and Surfliner trains with service between downtown Los Angeles and Ventura County. Unlike BART train service, it is not as regular and has gaps between trains sometimes of a few hours. But improvements are on the way.

Recently Bob Hope Airport opened a new Regional Intermodal Transportation Center. Part of this included a consolidated rental car facility across the street from the train station. As well as a large parking structure for the rental cars, a covered pedestrian walkway was built with moving sidewalks to make getting to the terminals faster and more comfortable. Access to this walkway is now possible by a nearby crosswalk to the train station. In a few years a new pedestrian bridge will be built to encourage more passengers to ride the train and use the walkway to get to the terminals 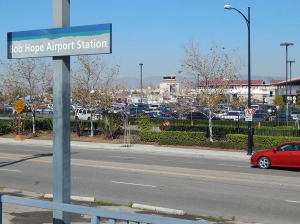 View from the train station at Bob Hope Airport. The covered walkway under construction can be seen on the right. 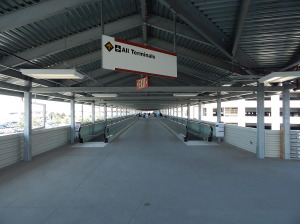 Inside the walkway to the Bob Hope Airport terminals

Bob Hope Airport will before 2022 have a second train station on the line between Los Angeles and Palmdale. This station will also be served by Surfliner, Metrolink and High Speed Rail. In fact this station will be a temporary terminus for High Speed Rail as part of its initial service. This will be the first High Speed Rail Station in California to serve an airport. At the beginning there will be a short shuttle bus ride from the station to the terminals. 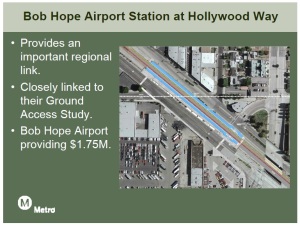 The next airport to get rail connections will be San Diego no later than 2016. The first leg will be a shuttle bus connection at the Washington Street Trolley Station. The shuttle bus will be using a new temporary inter-airport road for a new Consolidated Rental Car Facility being built near Washington Street. This new road will reduce traffic congestion on the surface streets to the terminals. It will do this by diverting passengers picking up or dropping off rental cars, parking at nearby airport parking and from the Trolley off the city streets to the new road.

The long range plan at the San Diego Airport is for all passengers to enter near Washington St to the airport where it is next to the freeway and railroad. This will include a new train station for Coaster and Surfliner trains, as well as Trolley service with a pedestrian bridge to connect to a new People Mover which will go under the runway to new and enlarged terminals. The plan is for the new airport train station to also be the High Speed Rail Station and main San Diego Train Station. The People Mover is planned to be in operation by the 2020’s and the rest of construction done by 2030-2035. 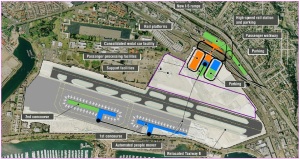 San Diego’s plans to rebuild the airport with a new entrance and train station.

It was recently announced that the Los Angeles International Airport (LAX) plans to build a People Mover by 2024. This is also part of a Consolidated Rental Car Facility to by built a little over a mile mile from the terminals. The People Mover will remove traffic from car rental customers with a ride to the terminal and eliminate the many rental car shuttle buses. The LAX People Mover will also serve an airport bus station and a Light Rail Station at 96th Street to be built just to connect to the People Mover. This Light Rail Station will be served by the Green Line and the new Crenshaw Line. The Green and Crenshaw Lines will share about a mile of trackage between 96th Street and Imperial Highway. 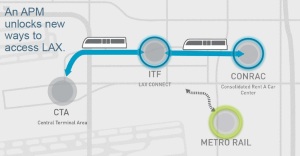 LAX graphic of plan for a People Mover

While this will be a big improvement, this rail service will miss many of the areas where many of LAX’s passengers live. The Green Line runs both south of LAX near the coast and due east to Norwalk along the Century Freeway. The Crenshaw Line will run from Imperial Highway north through Inglewood to Exposition Blvd at Crenshaw for a distance of 8.5 miles. Neither line directly serves West Los Angeles or downtown Los Angeles where many LAX travelers either live or are going to. At the Crenshaw Line, passenger can transfer from the subway station to the at-grade platforms of the Expo Line at Exposition Blvd. Here passengers can transfer to either West Los Angeles, Santa Monica or to downtown Los Angeles. 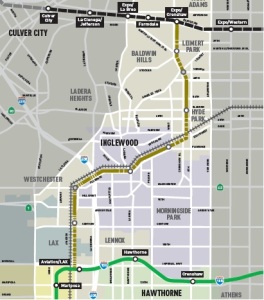 Crenshaw Line with connections to Green and Expo Lines 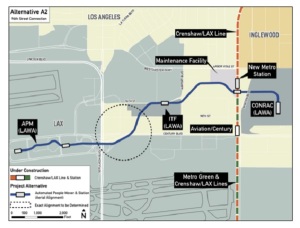 The likely alignment of the People Mover at LAX

As part of the California High Speed Rail project, there are plans to have connections to the Palmdale and Ontario Airports. Both airports have plenty of underused capacity. High Speed Rail service should be open to Palmdale by 2022. The station will be in Palmdale so a connection will be needed to the airport. Currently there is little commercial passenger traffic at Palmdale, and it is hard to attract airlines to use it. Local Palmdale officials are counting on High Speed Rail to increase passenger volumes at the airport.

It will likely be sometime after 2029 before High Speed Rail is built to Ontario. In the meantime there are constant battles between local officials and the Los Angeles World Airports (LAWA) over control of Ontario Airport. The LAWA controls both LAX and Ontario Airports. The people in the Inland Empire complain that LAWA isn’t doing enough to bring in air traffic to Ontario which has been in decline for years. There are increasing demands in the Inland Empire that control of Ontario Airport be in local hands and not LAWA’s.

Sacramento for years has been planning to extend its RT Light Rail service to the airport some 12 miles away from downtown Sacramento. This would be as an extension of the Green Line which was extended north of downtown in 2012 with the expectation it would be extended to the airport by 2017. Planning is underway to do just that. But so far there is no assured funding to extend the RT to the airport. 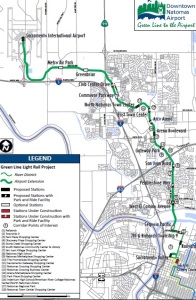