Here are this month’s photos by RailPAC photographers!
Click on each photo to see it full size!
Contributions to this page are welcome. Send your jpg rail photos to Russ Jackson, RailPAC Photo Editor, at info@xg1.b3e.myftpupload.com. 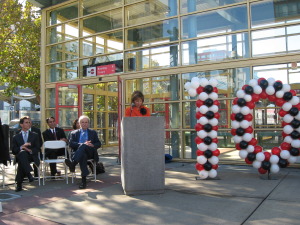 This was the celebration of the 10th anniversary of the Caltrain Baby Bullet trains, which was held the end of October at the 4th & Townsend Caltrain station in San Francisco. Caltrain Ridership has more than doubled in that ten years. Congresswoman Jackie Speir is speaking in this photo. Seated in the front row are State Senator Mark Leno (left) and Caltrain JPB Chairman and former SF Supervisor Tom Nolan (right). (Photo by Bruce Jenkins, who represented RailPAC and retired JPB Director/RailPAC VP North Art Lloyd.) 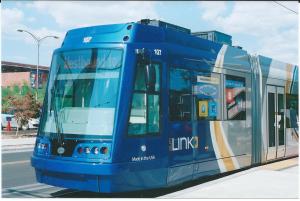 Tucson, Arizona’s modern streetcar, not technically light rail, seems off to a good start. Tony Haswell writes from Tucson that “ridership is close to projections and there have been no significant operational glitches. Tucson lacks either space in existing arterials or unused RR rights of way for provision of true light rail at a reasonable cost.” (Photo by Richard Strandberg.) 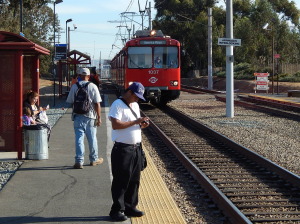 A San Diego Blue Line Trolley approaches the E Street station in Chula Vista on the original line, and using one of the original trainsets, on October 18, 2014. (Photo by Noel Braymer.) 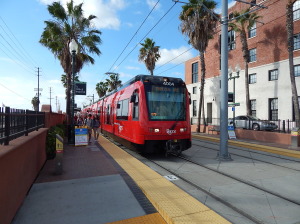 On the same day, October 18, a San Diego Green Line Trolley is at the Washington Street station in San Diego using the new cars. (Photo by Noel Braymer.) 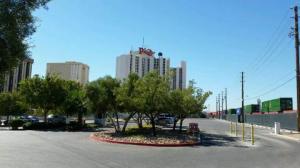 This is where the Amtrak station in Las Vegas, Nevada, was when the Desert Wind train was still running. A freight train can be seen passing on the Union Pacific tracks at the right. Ridership to/from Las Vegas was always strong for that train, by passengers going north as well as south. (Photo taken October 6, 2014 by Anthony Lee.)