Pros and Cons of a Burbank-Palmdale Underground HSR Short Cut

After years of studies and public meetings when it seemed the California High Speed Rail Authority was ready to make a final decision for the route between Burbank and Palmdale: they are studying a new route. This comes at the request of Los Angeles County Supervisor Michael Antonovich who’s district includes this route for High Speed Rail. This new alignment  would require  a tunnel near Bob Hope Airport in Burbank going directly under the San Gabriel Mountains to Palmdale. Such a route would be roughly 13 miles shorter than the other route already studied (35 miles versus 48 from Burbank to Palmdale). This new route would also avoid construction for the other route in parts of Santa Clarita and Acton which would please the residents in these towns.

No doubt a shorter route would be faster and both routes include a great deal of tunneling, so the costs could be close for both. So far no cost comparisons between the two routes are available. The reason this new route is shorter is because it would have a straighter alignment to Palmdale. Palmdale is actually east of downtown Los Angeles as well as Burbank. Heading west to Sylmar from Los Angeles Union Station, the route that had been studied makes a S curve to the east to reach Palmdale in a rather round about route. Turning northeast from Burbank in a tunnel eliminates much of this backtracking. 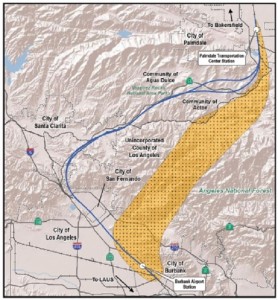 A major problem for Metrolink now is the single tracked tunnel built in the 1870’s connecting the San Fernando Valley to the Santa Clarita Valley. Besides being single tracked it has speed restrictions of 35 miles an hour and sometimes less.This is a major bottleneck for Metrolink service. The straighter route is better for longer distance service past Palmdale, but does nothing to improve service for the 3 Metrolink Stations in the Santa Clarita Valley.

A major argument for High Speed Rail is for reduction of pollution and Green House emissions. This is part of the justification for using Cap and Trade money for building High Speed Rail in California. As it stands now, few trains carry containers or trailers in California between Southern and Northern California. The reasons for this is the current rail route is too slow and intrastate traffic too short and unprofitable to attract the railroads to offer such service. Freight is often carried as well as passenger trains on High Speed Rail routes such as on the Chunnel between England and France. But for now there is neither interest by the railroads or the California High Speed Rail Authority to carry freight now carried by truck through the San Joaquin Valley. Truck traffic in the Valley is a major reason it has high levels of pollution.

My person guess is unless a major problem is discovered with this new direct route to Palmdale, it will likely be approved. The faster running times and fewer conflicts with property owners could easily tip the scales in its favor. What will still be missing is how to improve service on Metrolink on the Antelope Valley Line and the need to expand freight in California along the I-5 Corridor.There are no easy answers to these problems and funding to solve them is always limited.