Here are this month’s photos by RailPAC photographers.
Click on each photo to see it full size!
Contributions to this page are welcome. Send your jpg rail photos to Russ Jackson, RailPAC Photo Editor, at info@xg1.b3e.myftpupload.com. 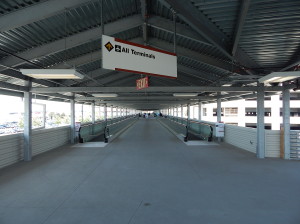 This is a segment of the new elevated path from the Bob Hope Burbank Airport train station and parking lot looking toward the airport. It has sections of moving sidewalk, and since the path isn’t in a straight line it makes a few 90 degree turns like this one. July 18 photo by Noel Braymer. 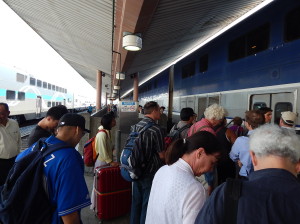 ?Not only is July and August the busiest months for the Surfliners, but Fridays and Sundays are their busiest days! Both trains I took that day were pretty full. I took this commuter Surfliner at 4:05PM from Los Angeles Union Station. Both trains were a little late but not by Amtrak’s standards. We were held up for a few minutes at Serra Siding by another Amtrak train. The biggest bottleneck on LOSSAN is at San Clemente. Something has to be done there before too long to have decent service between LA and San Diego. July 18 photo by Noel Braymer. 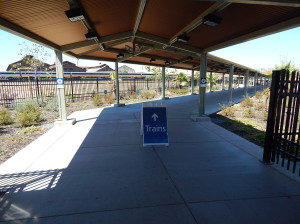 Another pathway. This shot shows the distance between the station and the platform at the Sacramento Amtrak station. The distance isn’t the issue here, it’s the round-about way of getting there that wastes time and confuses passengers. If the walkway went straight out to the platform from here there would be fewer complaints. July 12 photo by Noel Braymer. 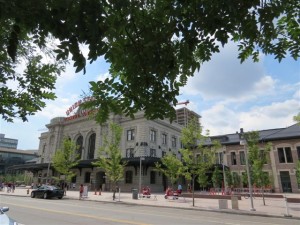 The Denver Union Station plaza and cab zone/passenger pickup reopened July 12, 2014. Interior restoration continued to full reopening on July 25, with some of the new restaurants open. Ridership at this station will boom once the new commuter rail line opens. July 13 photo by Bob Brewster of ColoRail, courtesy of Robert Rynerson. 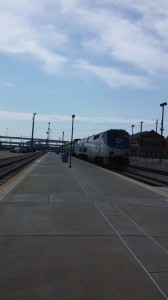 In July and August Amtrak’s Texas Eagle trains operated only between Ft. Worth and Chicago, with passengers to and from the stations south of Ft. Worth bused to board the trainsets that stayed overnight at the Ft. Worth station, as seen in this photo taken on an overcast, “cool” summer day in Texas. The reason for the change was construction at the famous Tower 55, south of the FTW station and under the overpass seen in the distance. July 15 photo by Russ Jackson.