Recently I went to visit Fresno for the first time. I have been on the train going through Fresno many times. I have also stopped in Fresno a few times. I even went to Fresno for a RailPAC meeting several years ago. But I’ve never really visited Fresno. I wanted to see the location of the future High Speed Rail Station and if there were any signs of demolition along the right of way. 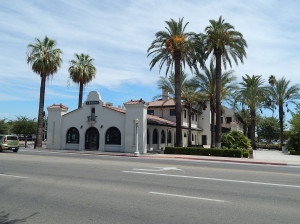 Amtrak Station in Fresno by the BNSF

After leaving the Amtrak Station, I turned left and walked west towards the center of downtown Fresno to the UP tracks just under a mile away. In the heart of downtown there are many impressive, often very tall office buildings. But most of the buildings in downtown Fresno are old, predating World War II. Looking at the windows of some of the office buildings I could see they were mostly empty. What newer buildings I could see generally were government buildings. Downtown Fresno is fairly clean and had fewer homeless than what you’d expect in the downtowns of most large cities, Fresno is the 5th largest city in California. But it is clear that Fresno’s best days had been long in the past. 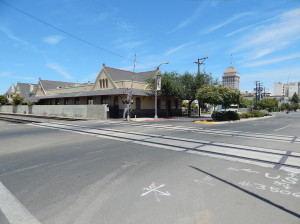 Looking east from the UP tracks in Fresno 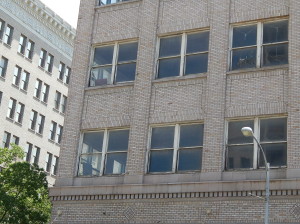 When I got to the UP tracks I was at the end of downtown Fresno. The area west of the UP was full of vacant lots and rundown buildings, many of them unoccupied. This is where the high speed tracks and train station will be built in Fresno. H street is on the east side of the UP where Fresno’s pride and joy is Chukchansi Park. It is the city’s public sports stadium and home for its local minor league baseball team. Across H street and just to the north of Chukchansi Park is the Greyhound Bus Station which has been at this location for many years. Right behind it is the 1889 Southern Pacific Station building which of course is no longer a train station. A short block to the west is G Street. 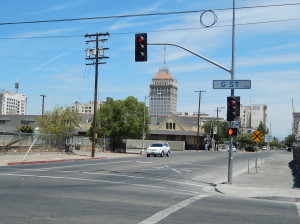 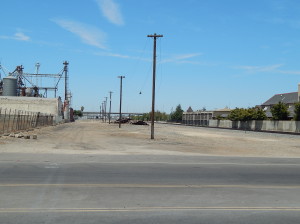 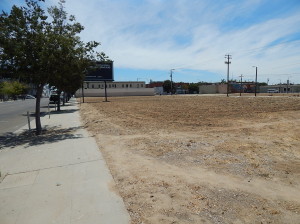 It is hard to tell which boarded-up buildings in the area around the station are slated for demolition since there are no signs saying property of California High Speed Rail Authority. One building being demolished for High Speed Rail is a large, abandoned Del Monte Packing House near Chukchinsi Park which recently had major fire damage. Ironically most of the demolition for the High Speed Rail project is not for the right of way, but for road overpasses. The High Speed Tracks in Fresno are mostly being laid at grade. But to grade separate the railroad, highway overpasses are being built to lift the roads over the railroad. To build these many overpasses is where most of the property is being condemned and buildings demolished. 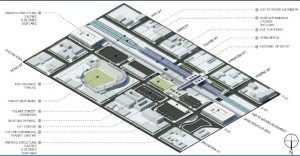 I took a bus trip to where some demolition had been publicized north of downtown along Gold State Blvd. Being mostly on foot it was hard to go very far. Without signs saying property of California High Speed Rail Authority it was hard to tell which were abandoned property and which were needed for a future overpass. The process is still in its early stages. On my bus trip I went through many residential neighborhoods in Fresno. What struck me was that most of the houses were built before 1950. There was very little if any new housing. 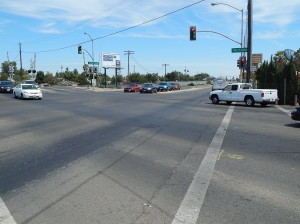 Golden State and McKinley, one of the many places where overpasses will be built over the UP and High Speed Rail tracks.

There has been much publicity since a proposition to split California into 6 smaller states was proposed, that if the San Joaquin Valley werte to become a State it would be the poorest state in the Country. It would be poorer than Mississippi, the current holder of that dubious distinction. Fresno and the other cities of the San Joaquin Valley clearly need new development and to broaden its economy beyond agriculture.

Many politicians from Texas love to brag about their low taxes and how this creates many new jobs in Texas. Yet most places with job growth have high taxes while most states with low taxes are in mostly rural areas with high unemployment. The big difference between Texas and California is the cost of living which is not because of taxes but from the cost of  housing in each State. Texas has plenty of open, cheap land. Most people in California live in a small area of the State within 50 miles the coast in the urban areas in the south and around the Bay Area. In these areas the demand for housing is high and so is the cost of housing.

The main expenses for most households are the cost of housing and transportation, not taxes. The key to High Speed Rail success in Fresno and the other cites of the San Joaquin Valley will be the availability of affordable housing and economical transportation. To attract employees, employers need a location employees will be able to afford to live near by and have enough money left over to enjoy life for employees to want to move there. This is what Texas cities has to offer with lower cost housing than what is available in the major urban areas of California. High Speed Rail will make Fresno and other cities in California more attractive to employers with good transportation and lower housing costs.

With High Speed Rail, Fresno will have connections in 2 hours or less to San Francisco International, Bob Hope, and Palmdale airports. Fresno will also have 2 hour or less connections to Silicon Valley, Los Angeles and Sacramento. Residents of Fresno will also be only two hours away or less to Disneyland, Universal Studios, or San Francisco. While people may joke about Fresno’s weather, it is no hotter in summer or colder in winter than it is in Dallas or Houston. But you won’t be able to get to Disneyland in 2 hours or less from Dallas or Houston without a rocket.