Can We Connect Metrolink to LAX?

Recently Shawn Nelson, Chairman of the Orange County Transportation Authority called for closing the gap of about 2.5 miles between the end of LA Metro’s Green Line (which by 2019 will connect with LAX) to the Norwalk/Santa Fe Springs Metrolink Station. No doubt LA Metro would agree, but would ask who is going pay to do this? As a comparison, the 2 mile Regional Connector rail transit tunnel, soon to be built in downtown Los Angeles with 3 stations for the Blue, Expo and Gold Lines will cost $1.4 billion dollars.

Back in the 1990’s Los Angeles County planned to extend the Green Line both towards LAX and the Metrolink Station. These projects were dropped in the late 90’s because of costs and funding problems. The planning back then in response to local residents concerns called for a tunnel to be built to extend the Green Line to Metrolink. The tracks at the Norwalk Green Line Station slope down past the platforms leading towards a portal for the tunnel that wasn’t built.

Currently all of LA Metro’s funding is committed to other projects. There are proposals to extend the sales tax in Los Angeles County to fund more projects including extending the Green Line to Metrolink. It will be 2016 at the earliest before such a measure will be put before the voters in Los Angeles County. The last time this was tired in 2012 the measure lost by less than one percent of the 2/3rds approval needed.

A less expensive alternative to tunneling would greatly reduce the construction costs if local residents would accept the use of a median on surface streets to connect at least part of a Green Line extension. The most direct route is along Imperial Highway. Creating a median for Light Rail can include street widening which is cheaper than tunneling. One way to reduce the space needed for a median is to operate part of the extension on a single track. 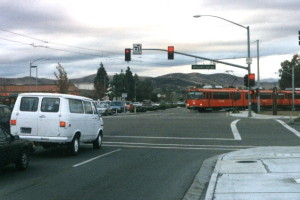 For an aerial view of the San Diego Trolley route on Cuyamaca Ave click here.

This is not unheard of. For years San Diego County has run Trolley service to Santee with almost a mile of single track in the middle of Cuyamaca Ave. The Trolley regularly operates 4 trains an hour each way this way. Other routes besides Imperial Highway could be looked at to reduce or eliminate tunneling. A slightly longer route could come out of a short tunnel from the current Green Line terminal alongside a UP rail line next to Firestone Blvd. This would generally avoid residential areas. The Green Line could turn up San Antonio Drive which becomes Norwalk Blvd before the Green Line would turn on Civic Center Drive to the Metrolink Station. An advantage to doing this is one or even two Green Line Stations could be added in the heart of Norwalk.

The combination of High Speed Rail and Surfliners in southern Los Angeles County at the Metrolink station to an extended Green Line would greatly improve connections between the Westside of Los Angeles County and the rest of the LOSSAN service area. This opens up easier travel and alternatives to travel on I-405. Such a connections would serve travelers to or from Orange, San Diego and the Inland Empire Counties. This would be an easier connections than catching the Blue Line in the future at Union Station and transferring again to the Green Line. We can see the impact Union Station has had for traffic on the Gold, Red and Purple Lines. Something like this would be possible at Norwalk with an extension of the Green Line.

previousRailPAC rail PHOTOS of the month (June, 2014)
nexteNewsletter for June 30, 2014