What’s So Great about Run-Through Tracks at LA Union Station?

When the city of Los Angeles originally proposed building a Union Station on the current site, the railroads opposed it. One of their reasons was that site would have station tracks that would dead end as stub tracks. This would require departing trains to back in to the station and terminating trains to be backed out to go to the yards. These excessive moves would easily create congestion with trains needing to back in and our of the new station’s throat. It also would create extra costs often requiring switching moves.

The railroads preferred to upgrade an existing station as the Union Station by using the existing tracks that ran along the banks of the Los Angeles River. But the city wanted a Union Station that would redevelop the area around Olvera Street and create a new Chinatown while using the rundown existing Chinatown as the site of the new Union Station. The result was in 1939 the city got a beautiful new station with stub tracks that branched off from the river and dead ended at the station.

Finally, hopefully by 2019, Los Angeles will get it all: a beautiful station with run-through tracks. So what’s so great about run-through tracks at a station? First you can run many more trains in an hour and throughout the day than with stub tracks. Trains will be able to come in one direction and leave in the same direction. This is easier and faster than backing in or out. It also won’t block the tracks at the throat for other trains trying to get in the station while another trains are leaving.

How much a big deal is this? Let’s compare Penn Station in New York with Los Angeles Union Station and Gare de Châtelet – Les Halles in Paris. Penn Station is practically 3 stations with separate tracks and concourses for the Long Island Railroad, New Jersey Transit and Amtrak. Penn Station has 21 tracks to carry 600,000 passengers a day while operating as a stub track station. Most trains terminate at Penn Station and reverse direction leaving the station. The result is each track is used about 3 times an hour and the tracks are often congested.

Compare this to Gare de Châtelet – Les Halles. This station has a grand total of 7 tracks with four platforms for its commuter rail system carrying almost a half a million passenger a day. At peak periods it handles up to 120 trains an hour or up to 17 trains an hour per track. There are now 12 tracks available at Los Angeles Union Station with 10 now usually in use. There are problems now running up to 110 round trip trains a day or 220 movements with Metrolink and Amtrak. Rail passenger ridership runs about 50,000 passengers a day now. A major part of the Gare de Châtelet – Les Halles ridership is the fact as a run through service, not only can the trains get in and out faster, but it roughly doubles the number of stations on a single line these trains can serve. This increases ridership and greatly reduces the number of trains running empty and not earning revenue, entering or leaving the station.

The new run-through tracks for Union Station will serve 4 platforms (platforms 2,3,4 and 5) for a total of 8 station tracks. This will require a 4 track bridge south of the station over the 101 freeway. These four tracks will split into two sets of double track as the new trackage bends to the east as one set goes north and the other south to connect with the railroad tracks to the east along the Los Angeles River. New railroad bridges will also be built across the river so trains can connect with tracks on the east bank of the river. This will allow trains to enter or leave from any track near Union Station from both the north and south ends of the station. 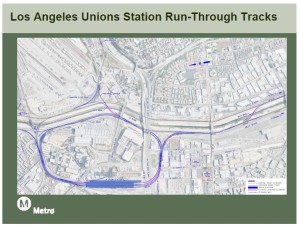 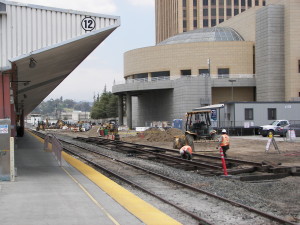 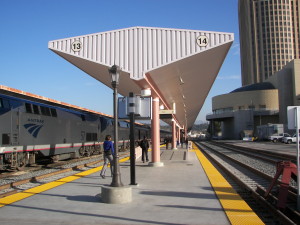 To construct the run-through tracks: tracks and platforms will have to be raised in order to clear the freeway to the south. A few years ago LA Metro prepared for this day by bringing 3 old tracks (#13,14,15) back into service. As one set of 2 tracks and a platform is out of service to be raised and rebuilt, these other tracks will serve the trains that usually used the tracks being rebuilt.When the work is completed Los Angeles Union Station will have 8 run-through tracks (#3-10) and 5 remaining stub end tracks (#11-15). This gives 14 passenger tracks with platforms and track 15 without a platform which can be used as a storage track. Tracks 1 and 2 are now used by the Gold Line Light Rail trains. 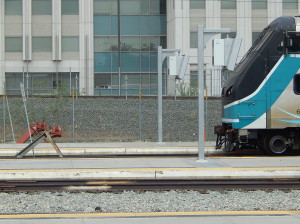 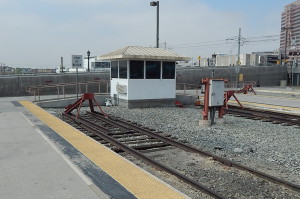 The view of Tracks 7&8 and the access road the tracks will have to go over.

For passenger traveling to or through Los Angeles Union Station, this will mean a times savings of between 10 to 15 minutes. Trains can stop and go with run-through tracks like a stop at any other station. Faster running times and direct service without transfers to more destinations will be the big pay off for passengers of the $350 million dollar Southern California Regional Interconnector Project, or LAUS run-through tracks.

Los Angeles is getting very serious about rail service. By 2020 not only will Union Station get run-though tracks, but will have greatly expanded light rail service with the Regional Connector which will connect the Gold, Blue and Expo Lines through downtown Los Angeles. When this is finished passengers will be able to travel to Union Station by Light Rail between Azusa through to Long Beach. At Little Tokyo there will be a transfer for passengers from Union Station going to East Los Angeles and to Santa Monica. At the same time Union Station is getting a major do over. An all new concourse will be roomier than the current pedestrian tunnel. This will make it easier to make connections to rail and bus transit. There will also be many new stores, restaurants and services at the Station as well as developments bringing more commuters and visitors to Los Angeles Union Station. 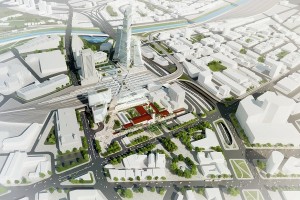 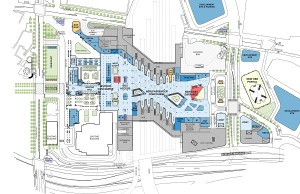