Here are this month’s photos by RailPAC photographers. Click on each photo to see it full size! Contributions to this page are welcome. Send your jpeg rail photos to Russ Jackson, RailPAC Photo Editor, at info@xg1.b3e.myftpupload.com.

THIS MONTH WE ARE SHOWING TEN (10!!) PHOTOS, including Art Lloyd’s honor by RailPAC; Train Day at LAUS, Santa Barbara, and Emeryville; the new Amtrak St. Paul station; and a shot for RailPAC by Carl Morrison from Fullerton RR Days. Other articles posted on this site this month have also contained interesting photos, such as at San Juan Capistrano, Florida, the Coast Line, and a full LAUS Train Day report. 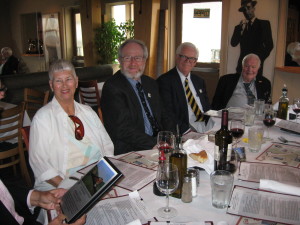 On Tuesday May 20th, the RailPAC Board honored Art Lloyd for his service not only to the group as VP North, but for the totality of his career in passenger rail at a luncheon at the Trellis Restaurant in Menlo Park. Art, at the right in the photo, was joined by many current and former RailPAC Board members, including (left to right) Marcia Johnston, Bill Kerby, and Bruce Jenkins. (RailPAC photo.) 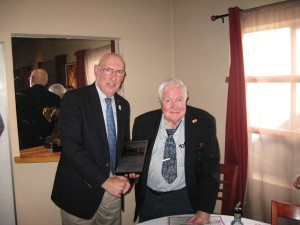 RailPAC President Paul Dyson, left, presented Art Lloyd with a plaque honoring his service. Art, who would be 89 in a few days, appreciated the photo on the plaque of his favorite train, Western Pacific’s original “California Zephyr.” (Bruce Jenkins photo.) 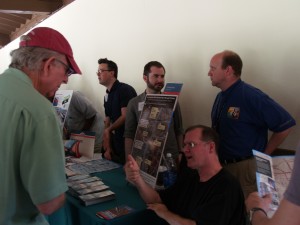 This is the RailPAC-NARP table at Los Angeles Union Station on L.A.’s Train Day, also the 75th Anniversary of LAUS, May 3, 2014. In the center is NARP’s Matt Melzer, and RailPAC Associate Director Mike Barnbaum, who spoke with the visitors about passenger rail advocacy. The photographer also spoke with the NARP people about contacting legislators. (Mike Palmer photo.) 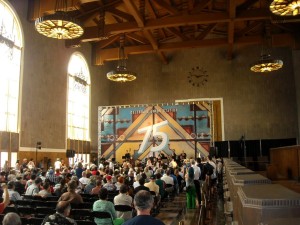 The 75th Anniversary of Los Angeles Union Station included performances in the huge ticket room at the front of the station, once used by the three founding railroads, AT&SF, Southern Pacific, and Union Pacific. The historic ticket windows are shown on the right side of the photo. (Alexander Friedman photo) 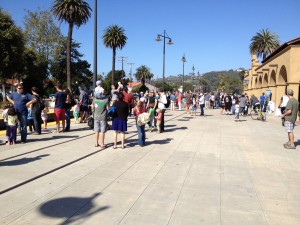 This large crowd is waiting for the southbound special Surfliner to Carpinteria which was part of Train Day at Santa Barbara, which was sponsored by RailPAC and led by RailPAC Director, Dennis Story. (Paul Dyson photo.) 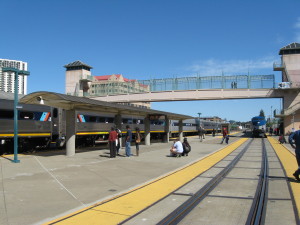 These are the Amtrak California Comet Cars that run on the San Joaquin trains. This southbound train was at the Emeryville station for National Train Day, May 10, 2014. (Bruce Jenkins photo.) 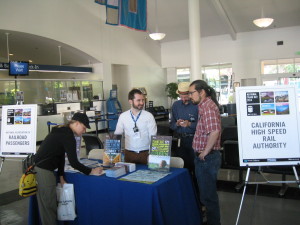 If this photo looks familiar, it is the same scene as in photo 3 above, but inside the Emeryville Train Day event a week later. Matt Melzer is in the center, continuing to speak with the northern California visitors about rail passenger advocacy. (Bruce Jenkins photo.) 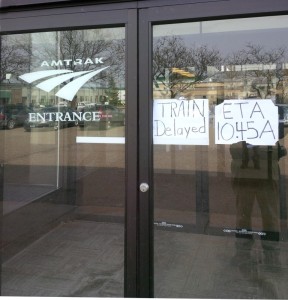 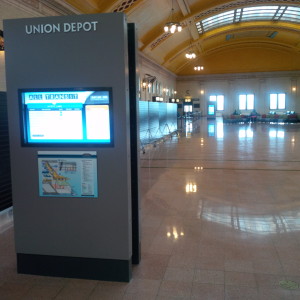 The first use of the new St. Paul, Minnesota, Union Depot started the night of May 7 with the arrival of the westbound Empire Builder. In this May 20 photo passengers were waiting for the chronically late train #8. Access from this waiting room is through an unmarked door, and down two floors. Agents expected 54 passengers on-off that day. (Andy Selden photo.) 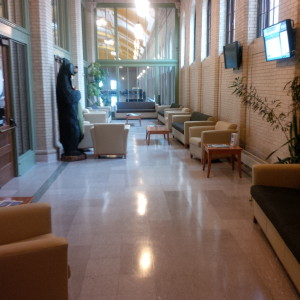 St. Paul, Minnesota, Union Depot has this small enclosed lounge for sleeping car passengers, but it is at least 100 yards from the one Amtrak gate. (Andy Selden photo.)

Making sure we show a full train set this month, we are pleased to show Amfleet equipped Pacific Surfliner 572 with locomotive 145 on the point passing Fullerton, California’s very active Amtrak station on May 4, 2014 at about 11:40 a.m. during Railroad Days 2014 presented by the Southern California Railway Plaza Association. (Photo by Carl Morrison, TrainWeb.com.)

previouseNewsletter for May 27, 2014
nextNot Exactly the Happiest Place on Earth – the New Anaheim Station as the Passenger Will See It