A great rail destination is one where the station is a destination and a short walking distance to places to see with plenty to do. If you like a place that is different, with lots of history, scenery, places to shop and eat: then San Juan Capistrano is a great place to visit. The Spanish first colonize San Juan Capistrano back in 1776. But the area has been inhabited for thousands of years. And the local train station is in the heart of it all.

Click on all pictures to enlarge, all Photo by Noel T. Braymer 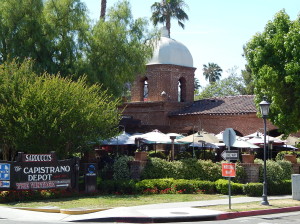 The original San Juan Capistrano Station is an oldie but a goodie! Constructed in 1894 by the Santa Fe Railroad, it was an early example of Mission Style architecture both on the Santa Fe and in California. The building today houses a restaurant and is stripped to its brickwork of its original plaster coating. 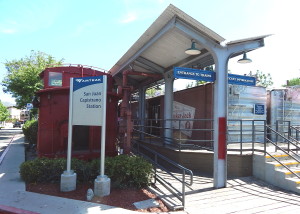 This is the Amtrak Office at San Juan Capistrano. It is north of the original station building inside a converted boxcar. Several other old passenger and freight cars make up another restaurant at the San Juan Capistrano Station. 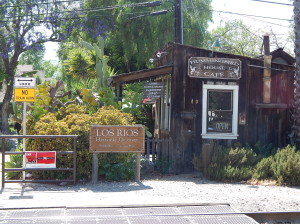 Just across the tracks from the station is the Los Rios Historical District. Like most of Orange County, the rail crossings in San Juan Capistrano have been upgraded to “Quiet Zone” status which means the train horns are not sounded unless someone is on the tracks. Los Rios could be described as “rustic” or “funky”. Either way there are several things here for visitors to do. 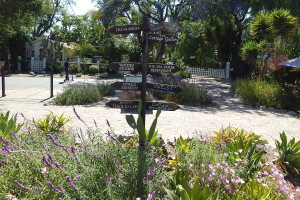 This is a sign for some of the things to do at Los Rios. There are places to eat, art galleries, shops and even a petting zoo. 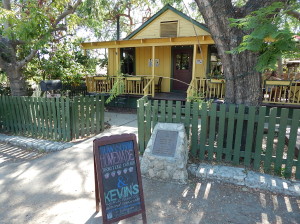 This old house built in 1890 was originally the Olivares  Home. It was restored in 1980 and is now a restaurant. Many places in San Juan Capistrano have a long history and there are plaques to inform all of their history. 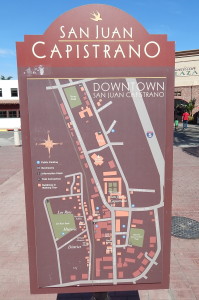 You can’t get lost in downtown San Juan Capistrano. This is a city map at the train station. Copies of this map are in several locations downtown showing where the sights are. 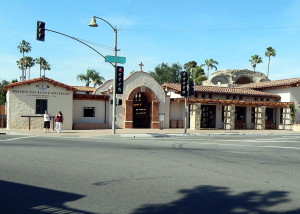 Just around the corner from the station is the entrance to the Mission San Juan Capistrano. Founded in 1776, it has many restored original adobe buildings. Seen in the background of this picture are the ruins of the old stone church which was destroyed in 1812 by a major earthquake. It was quite an accomplishment by the Spanish to build a romanesque stone church in California in the late 18th century. 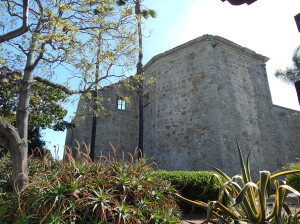 This is a closer view of the impressive ruins of the old stone church at San Juan Capistrano. 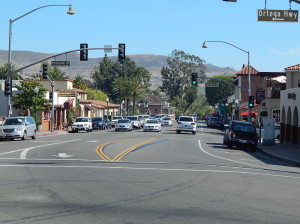 A view down the main street by the railroad tracks in the valley around San Juan Capistrano. 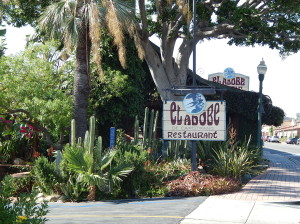 Many of the historic buildings in San Juan Capistrano are privately owned and are not open to the public.  One that is open to the public is the El Adobe restaurant. Built from 2 original adobe buildings, it is one of the few places in California that you can dine in a building built in 1778. 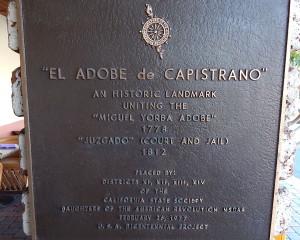 This is the plaque with the story behind the El Adobe restaurant. 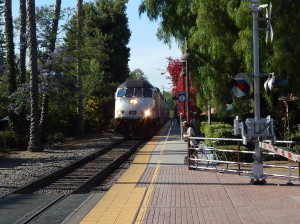 Taking the train to and from San Juan Capistrano is easy to do. There are 11 round trip Pacific Surliner trains daily between San Diego and Los Angeles as well as many as 8 Metrolink trains on weekdays.

For more information about things to do in San Juan Capistrano we have these links:

If you like a good walk from the station, there is The Ecology Center