A Photo Tour of the southern Coast Line

The railroad that hugs the Coast along Ventura, Santa Barbara and San Luis Obispo Counties is both picturesque and has a great deal of potential for ridership growth. What is holding it back is as usual, lack of funding and cooperation from the Union Pacific. It is only a matter of time though before we will see rail passenger service really take off on this line and see it fulfills its potential. Here is a collection of photos taken over the years of the Coast Line and to its potential and the progress that has been made. 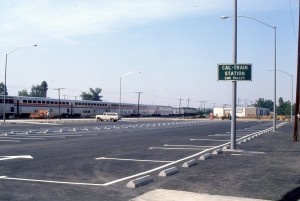 This photo from the 1980’s shows the Coast Starlight stopping at Simi Valley. The sign says Cal Train Station. This station and the sign were result of a short lived attempt to bring commuter rail service by Caltrans in 1982 from Ventura County to Los Angeles. The project had been opposed and delayed for years by the Southern Pacific. It didn’t survive the change of administration in Sacramento after 1983. But several stations like this in the San Fernando Valley and Ventura County remain.   Photo by Noel T. Braymer 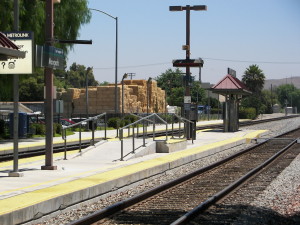 This is the Metrolink Moorpark Station. True to its rural nature and history next to the station is a livestock feed supply business. Increasingly Ventura County is becoming more of a bedroom community with residents commuting to work outside the county. Photo by Noel T. Braymer 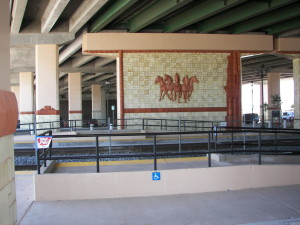 This is the Metrolink Station at Camarillo. It is literally build under a highway overpass. What is interesting about this station is the artwork at the station station with a horse motif. Photo by Noel T. Braymer 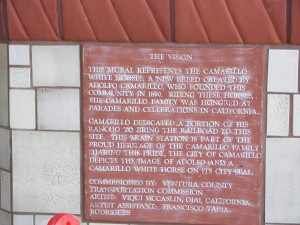 This plaque at the Camarillo Station gives the background of the artwork and the horse theme. Photo by Noel T. Braymer 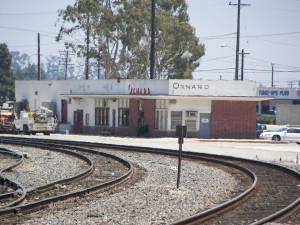 This picture shot in 2006 from the current Oxnard Transportation Center shows the old SP Station looking much the same as it did just a few years before when it was the Amtrak Stations. For the railroads many of the old stations were primarily used for their freight traffic which was always their prime business. Passenger service was secondary concern. Photo by Noel T. Braymer 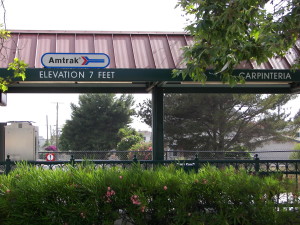 The station at Carpinteria south of Santa Barbara. Beautiful little town near the beach. The station is only 7 feet at this point above sea level. This is both the good and bad thing about this railroad. The ocean is a great attraction. But the low elevation makes it vunerable to storms and flooding. Photo by Noel T. Braymer 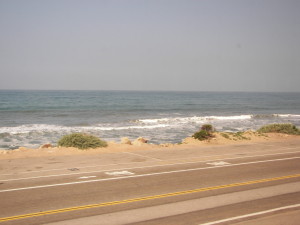 One of the many sea views from the train on the Coast Line. Photo by Noel T. Braymer 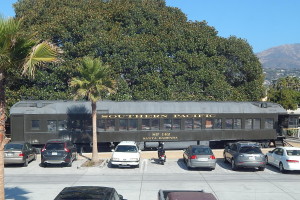 Since 2009 the City of Santa Barbara has owned the old SP Private Car ‘Santa Barbara” from 1929 and put it on display next to the Santa Barbara Train Station. Photo by Noel T. Braymer 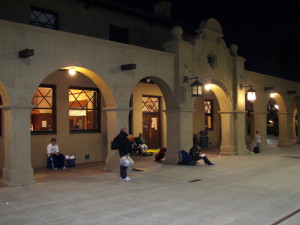 This photo from Santa Barbara is of passengers waiting for the first train in the morning on a Sunday back in October 2009. Most of the waiting passenger were on an overnight Ambus from the Bay Area making connections to the first  morning Surfliner  departure. Additional trains between San Jose and San Diego would do quite well, if they ran. Photo by Noel T. Braymer 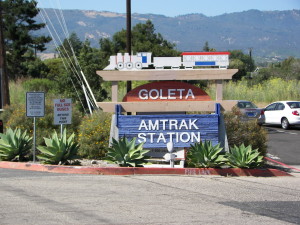 The sign to the Goleta Station is at the very least colorful. Goleta is the terminus and storage site for several Pacific Surliner Trains in Santa Barbara County. It is also near the University of California Santa Barbara and gets many passengers from students and staff. Photo by Noel T. Braymer 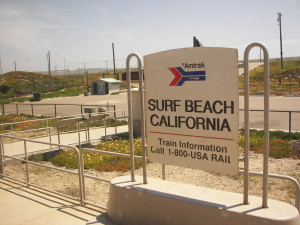 The Surf Beach Station gateway to Lompoc and Vandenberg Air Force Base. Along with the ocean, passengers can get a close of view of some of the launching pads at Vandenberg.Photo by Noel T. Braymer 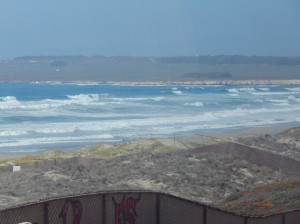 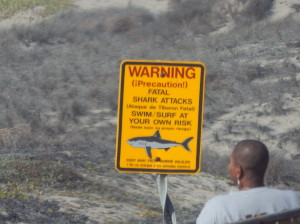 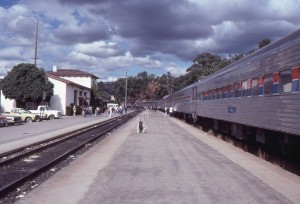 This view of the Coast Starlight and the San Luis Obispo Train Station goes back to 1980. It has taken some time but this is a reminder of the progress that has been made since then. The equipment is better and there is more frequent passenger service. In 1980 there was one round trip a day on the Coast Starlight to San Luis Obispo. Today there are also 2 round trip Pacific Surliners from San San Luis Obispo to Southern California as well as 3 roundtrip Ambus connections to Surfliners at Santa Barbara. Santa Barbara has 5 round trip trains to Southern California. Photo by Noel T. Braymer 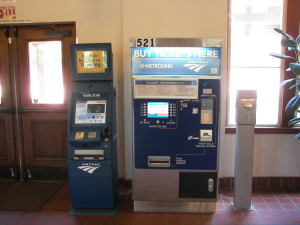 Metrolink Ticket Machine in the San Luis Obispo Station in 2008. As part of the efforts to improve rail connections, Metrolink has set up ticket machines at several stations outside of their service areas such as San Luis Obispo and San Diego. With improved connections from the joint LOSSAN Timetable and future joint ticketing, more passenger should be able to travel more places “seamlessly” in California. Photo by Noel T. Braymer 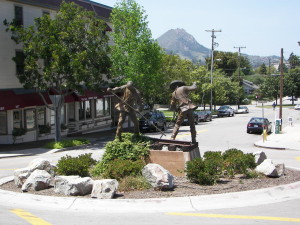 San Luis Obispo  by the station with a picture of a monument to the Chinese who built the railroads in California including on the  along the Coast. San Luis Obispo is a pleasant, small but growing town which is a delight to visit. Besides the railroad and being a college town (Cal Poly San Luis Obispo) it also has one of the original Spanish Missions which is worth visiting