Most of the attention now in the San Joaquin Valley is focused on High Speed Rail Construction. This would build 130 miles of new railroad between Madrea and Bakersfield in the next few years. This railroad would be first used for up to 11 express San Joaquin round trip trains a day with new equipment capable of speed up to 125 miles per hour and running before 2020. But there are also longer range plans to expand San Joaquin service and increase speeds of the trains on the current route up to 90 miles per hour from the current 79 miles per hour. In the future the plan is to increase Bakersfield to Oakland frequencies from 4 to between 6 to 10 round trips a day. There are also long term plans to increase the current 2 round trips from Bakersfield to Sacramento up to 6 round trips a day. But for any of this to happen will require track improvements. Here is what is planned and is available in the San Joaquin Valley.

Currently work is ongoing for $24.5 million dollars towards Positive Train Control between Bakersfield and Port Chicago. There are also plans to build a layover facility to terminate and turnaround trains at Fresno to Oakland for $14.6 million dollars. Also under construction now is double tracking between Port Chicago in the upper San Francisco Bay southwest to Oakley on the BNSF. This is a $55 million dollar project. 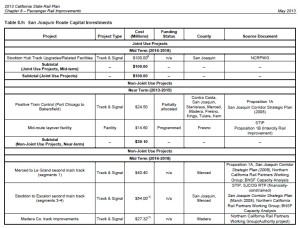 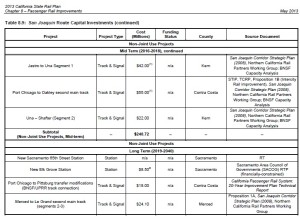 Notice that many of these projects as of 2013 had not been funded.

Among the projects proposed by the Rail Commission are trains terminating in Fresno. This would allow earlier arrivals and latter departures from Oakland and the Bay Area for passengers from Fresno north. Also being looked at in the short term are additional stations. This could include extending service to the Oakland Coliseum Capitol Corridor Station with connections to BART and the Oakland Airport. Also stations are being considered in Hercules, Berkeley, 65th St. Sacramento, Elk Grove, North Fresno and Northwest Bakersfield.

In the near term (before 2020) there is planning for a 7th and then an 8th daily train. These will need track improvements before they can be run. There is discussion of more frequent and improved service to Sacramento. As of 2013 many of these projects needed to expand service had yet to be funded. It is hard to predict when such funding will be available. 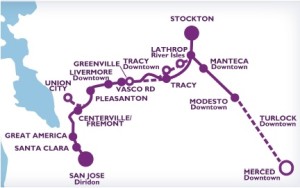 This us current plan for ACE for track improvements and service extensions.

In the future ACE plans to connect more with San Joaquin trains and future High Speed Rail service.This will also require additional funding for these improvements which ACE is hoping will be funded as part of the High Speed Rail project. The plan for ACE over roughly the next ten years is to increase the current frequencies of 4 up first to 6 and then 10 round trips between Stockton and San Jose. In addition there are plans to extend service first to Modesto on the UP and then to Merced to connect in the future with the first operating segment of High Speed Rail. ACE had long term plans to run up to Sacramento. It even has an agreement with the UP for service between Stockton and Sacramento. For the present it looks like that will be handled in the future by the San Joaquins. 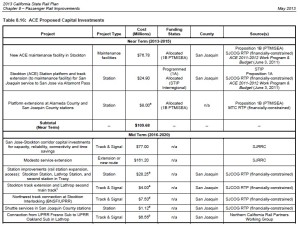 This is much of the proposed spending for ACE needed for future expansion.