Here are this month’s photos by RailPAC photographers. Click on each photo to see it full size! Contributions to this page are welcome. Send your jpg rail photos to Russ Jackson, RailPAC Photo Editor, at info@xg1.b3e.myftpupload.com. 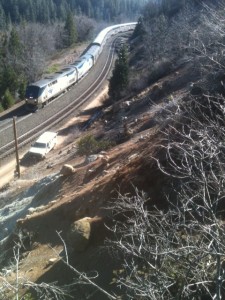 After losing over 45 minutes between Roseville and Colfax, Amtrak train #6 the California Zephyr passes a Sunday work crew doing preliminary work for signal upgrades near MP 165 at Blue Canyon. New bi-directional signals are currently being cut in between Colfax and Gold Run. On the day this photo was taken, February 23, the California drought had seen bare ground all winter. A few days later a huge winter storm came through the area. (Ralph James photo and caption.) 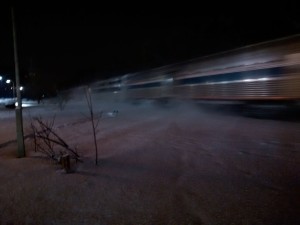 This winter has been cold, windy, and snowy over most of the country. Here is Amtrak #50, The Cardinal, departing Dyer, Indiana on the evening of February 8 after crossing the Lincoln Highway (US30). (Photo for RailPAC by Steven Crosmer.) 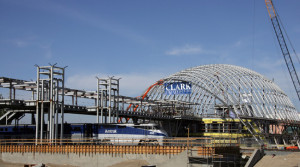 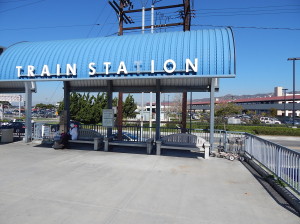 View from the Train Station at Bob Hope Airport. In the background is the covered elevated walkway to the air terminal from the new parking structures and transportation center. In the near future a new bridge will connect the station to the walkway and allow people to walk over and on top of the tracks between platforms. (Photo and caption by Noel Braymer.) 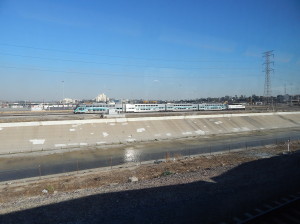 From one train to another. This view is from the photographer’s February 21 southbound train on the west side of the Los Angeles River looking at a Metrolink train headed east to San Bernardino on the Union Pacific tracks on the east side of the river. The big white building in the distance is LA General Hospital. A few days later the Los Angeles River was filled with runoff from the storms. (Photo by Noel Braymer)

previousWhat will and what should happen for Rail in San Diego
nexteNewsletter for March 10, 2014