Passenger Trains are Good for Business

All cities are economic centers. As such they are also major hubs of transportation. Cities are always found at ports, major rivers, rail and road junctions as well near mountain passes: anyplace where there is transportation by water, surface or air. In the 19th century, towns fought to have railroads built in their towns so” grass wouldn’t grow in their streets”. We are again seeing towns and cities fighting to get rail passenger service and stations. They understand what a difference rail service can make to their local economy.

The towns of Grand Forks, Devils Lake and Rugby in North Dakota have been affected by the recent problems the Empire Builder has been having running on time due to track congestion from increased oil train traffic. Recently these 3 towns have temporarily lost rail service as the Builder has been rerouted due to track congestion. This has been bad for business. Just one example for 19 years in Devils Lake, Woodland Resorts has had a Perch Express fishing package with travel on the Empire Builder. With trains often running up to 18 hours late, anglers are being told to drive.

This may be a small example of the impact of rail service. But it is a big deal to the economies of these small towns. Now multiply that by hundreds of these towns across the country and these add up. Many small towns in remote areas are losing jobs and population around the country.

The City of Pueblo, Colorado is doing something about this. They are seeking to have rail passenger service extended to their city by rerouting the Southwest Chief. For this to even happen, Pueblo is supporting efforts to keep the Chief in Colorado. That means money needs to be found to bring the tracks in New Mexico, Colorado and Kansas back up to passenger rail standards or service will end in these States after 2015. Rerouting the Chief to Pueblo and fixing the existing tracks to there will cost extra: is this worth it?

Pueblo County commissioned an economic study of the economic impact of the Southwest Chief to the region by 2 Professors of Business at Colorado State University-Pueblo. Their findings based on the current annual ridership of 6,300 visitors on the Chief to southern Colorado is it now creates $5.7 million dollars a year in spending. Over a 10 years period that’s $57 million dollars. This is based on the multiplier effect when spending stimulates additional spending. Current estimates of the costs per state to repair the Chief’s route spread across 5 states is $40 million dollars each which would include Colorado. Adding Pueblo as a stop to the Chief is estimated to cost $31 million dollars but would increase ridership in Colorado. This should return more in revenue than the cost of the reroute.

To see what the effect is of adding and improving rail passenger service one need only look the many transportation centers built with rail service since 1984. It was in 1984 that the first intermodal transportation center was opened in Oceanside. RailPAC’s Byron Nordberg was the “Father” of the Oceanside Transportation Center. He first proposed this in 1969, two years before the start up of Amtrak.

Oceanside had the first facility in California built around rail passenger service also with intercity bus and local transit bus service. It has since grown to include commuter and transit rail. Doing this makes transfers between modes much easier and increases ridership on all travel modes. There was more to this project than just improving rail and bus service around downtown Oceanside.

In 1969 the area around downtown Oceanside was seedy. It was run down with a freight rail yard at the train station. Much of the area was zoned for light industry which were run down and didn’t pay much in local taxes. Downtown Oceanside was mostly known for numerous bars, prostitutes and crime. But the area around the train station was near the beach and the city pier which were major assets if the city could transform itself into a beach resort. 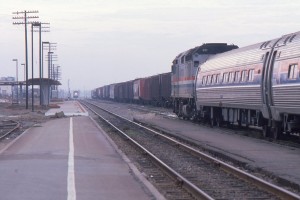 Byron was a member of the local chamber of commerce. He pitched his idea for a transportation center to the chamber, which then presented it to the city. The city’s transportation center was made the keystone of the redevelopment plan to turn Oceanside into a seaside resort which would bring in more business and money than the status quo in 1969.

To accomplish this the rail yard had to be relocated. The area rezoned and slowly the run down industrial buildings and vacant lots were replaced with new housing. Prostitution and crime has since been greatly reduced and new stores and attractions added. A major part of the plan was the building of resort hotels near the transportation center to bring in more visitors. Not all of this was accomplished by 1984. But though the years this masterplan has been achieved. Here are quotes from the Seaside Courier for February 9, 2014 from an article titled “Transformation of downtown Oceanside moves into high gear: …The next piece in downtown Oceanside’s transformation from a backwater into a regional tourist destination is set to open Feb. 11…The 149-room Springhill Suites by Marriott hotel, at 110 N. Myers St., will include meeting space, a rooftop pool with sweeping ocean views, a new entry into Oceanside’s culinary scene with the Hello Betty Fish House, and interior spaces decorated with the works of local artists….The hotel was built on a formerly vacant lot just a couple of blocks from the beach. …One block – adjacent to the pier – was developed several years ago with a Wyndham resort, which includes two restaurants. Plans are in the works for additional development, including a beachfront resort on two blocks bounded by North Pacific and North Myers streets, Pier View Way and Seagaze Drive. …The hotel’s proximity to the Oceanside Transit Center allows visitors from Orange County or Los Angeles to take the train south for a “carless vacation,” Maola said.” 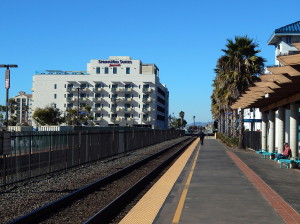 Is it any wonder that just in California there are major upgrades to stations in the big cities. Los Angeles County recently bought Los Angeles Union Station. Not only are there plans to expand rail and bus service at the station, but also major commercial redevelopment in and around the station which preserving the historic buildings. San Francisco is building the Transbay Center as its downtown transportation center which will be the new terminal for Caltrain and High Speed Rail. In Anaheim that city will open later this year it’s Anaheim Regional Transportation Intermodal Center or ARTIC. It will serve Disneyland area, Anaheim Stadium, the Honda Center and a local population of almost a million people. 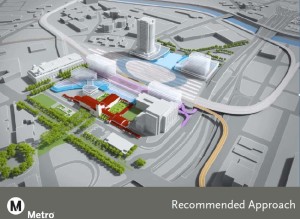 Rail passenger service isn’t just good for the ecology, it is good for business plus creating jobs and wealth.