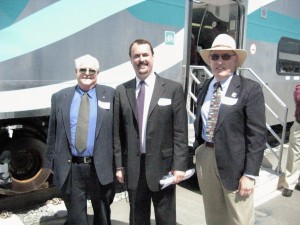 Photo from about 2010 with RailPAC Director Neil Bjornsen on the left with then Chairman of SCRRA (Metrolink) Keith Mullhouse of Moorpark at center and at right RailPAC President Paul Dyson.

The passenger rail advocacy community, the Los Angeles Count Metropolitan Transportation Agency (“Metro”) and the Citizens’ Advisory Council (CAC) are dealt a great loss with the recent passing of Neil Bjornsen, the chair of the CAC.

With the advisory council since 1977, Neil gave invaluable leadership and direction in forming the CAC into an important group providing community feedback on Metro’s transportation services. Neil and the CAC helped update the agency’s maintenance computers and with the switchover to Compressed Natural Gas and fueling stations, and also conducted field surveys while riding the routes and tabulating boarding counts.

Neil was in the forefront of promoting excellence in maintenance practices. He championed investments in deferred maintenance and proposed improvements in bus and rail system safety in addition to highlighting performance metrics for more informed decision-making.

Tireless and dedicated to Metro and the CAC, Neil convened meetings twice a month to both keep abreast of the agency’s transit activities and welcome the public to offer suggestions and feedback. Often Neil would take other CAC members on tours and visits of the bus divisions to observe practices and offer suggestions on how Metro can improve procedures.

A Navy veteran, Neil worked in maintenance at the Southern California Rapid Transit District and was a general manager of a transit system in Shreveport, LA. He retired from the LA County Public Works.

Neil was president of the Pacific Railway Society, a Board member of the Rail Passenger Association of California and Nevada, purser of the Lane Victory in San Pedro, and affiliated with many other organizations including the National Association of Railroad Passengers, Orange Empire Railway Museum, Foothill Transit, and City of Duarte Traffic Safety Commission. Neil was an enthusiastic volunteer and and gave freely of his time to help the organizations that he joined.

A native Southern Californian, Neil went to San Marino High School and held a bachelor’s degree in transportation. He was 68.

RailPAC joins Metro, the CAC, and the transit industry in honoring Neil for his 51 years in mass transportation which includes all aspects of public transit, both rail and motor coach, traffic streets, roadways, congestion management and railroads.

A memorial will be held at the Metro HQ, One Gateway Plaza, Los Angeles, at 9.30 am, Friday February 7th.