Here’s What’s Happening on the LOSSAN Corridor in 2014

There is a great deal of construction that will be finished as well as started during 2014 along the LOSSAN Rail Corridor. This is largely centered in the Counties of San Diego, Orange and Los Angeles. This is a quick review of some of these project underway now. 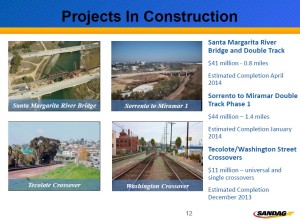 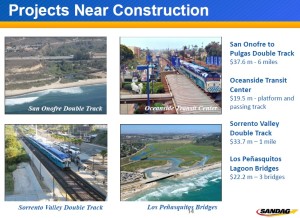 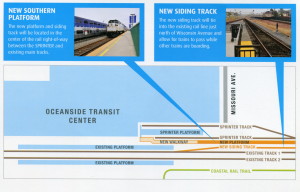 OCTA in cooperation with Metrolink, the city of Laguna Niguel and the city of San Juan Capistrano, proposes the addition of approximately 1.8 miles of new passing siding railroad track adjacent to the existing mainline railroad track from the Laguna Niguel/Mission Viejo Metrolink Station to 500-feet north of Trabuco Creek in San Juan Capistrano. All work on the tracks will be done within the existing railroad right-of-way, minimizing impacts to the community.

The Sand Canyon Undercrossing was ranked by the Orange County Transportation Authority as one of the highest priority rail crossing projects in Orange County. Building this undercrossing will help relieve traffic delays and accommodate future travel needs in the area.

The project is estimated to cost $56 million and will be underway from mid-2011 to approximately late 2014. Funding is provided by a combination of Measure M – the half-cent sales tax for transportation improvements in Orange County – and state and local sources. 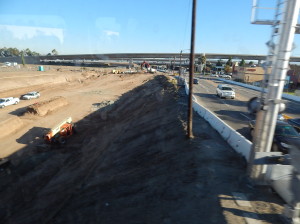 View from the train of constructions of San Canyon Underpass in December 2013. Photo by Noel T. Braymer 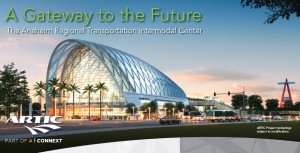 In December 2013, the City of Anaheim reported that their new Transportation Center had reached the halfway point in construction and was on track to open in late 2014. 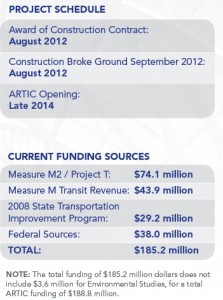 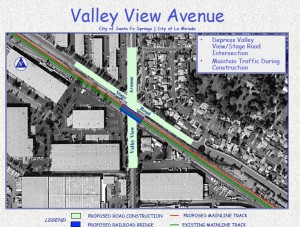 Groundbreaking for the Valley View Ave grade separation was on Tuesday, June 19, 2012 for this $75 million dollars project. The project will be completed by fall of 2014. But the actual rail bridge for this overpass was put into service in November 2013. This is part of a long term program to create a 15 mile, 4 track joint freight and passenger railroad from Fullerton to the City of Commerce.

The following is from this LA Metro report on future capital plans for rail passenger service (LOSSAN and Metrolink). 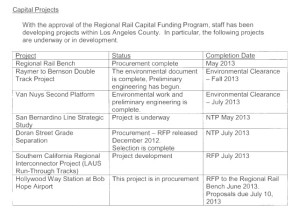 The Raymer to Bernson double track will double track the LOSSAN Corridor in the San Fernando Valley and allow increased traffic. This will be combined with a second fieldside platform at the Van Nuys Station.The Doran Street grade crossing is in Glendale and has a history or crossing accidents. It is used by the Antelope Valley Line and future High Speed Rail. Metrolink line. The San Bernardino Metrolink Line is its busiest and there are plans to add more double tracking.The Hollywood Way Station is a second train station at Bob Hope Airport. It will be used by Metrolink Antelope Valley trains, future High Speed Rail Trains and extended LOSSAN Trains in the future to connect with High Speed Rail. 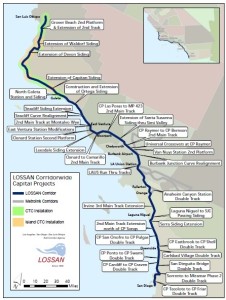