RailPAC PHOTOS of the Month (December, 2013)

Here are this month’s photos by RailPAC photographers. Click on each photo to see it full size! Contributions to this page are welcome. Send your jpg rail photos to RailPAC Photo Editor, at info@xg1.b3e.myftpupload.com. Russ Jackson, Photo page editor. And, a HAPPY NEW YEAR from the RailPAC Staff. 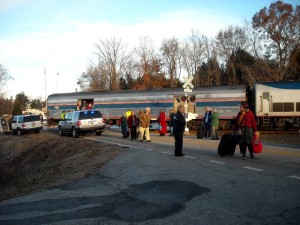 RailPAC member, Alexander Friedman, was on board the northbound Amtrak Crescent that derailed in South Carolina on November 23, 2013. This is one of his photos from that event. To read his complete report, see “Getting Derailed on the Crescent for Thanksgiving!” on this website, below. 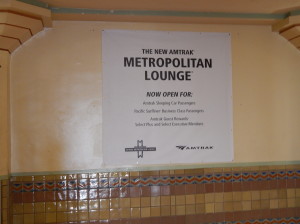 Amtrak’s new Metropolitan Lounge opened in October, located on the second floor of Los Angeles Union Station, above the rental car booths. It was dedicated in a ceremony in December. RailPAC President, Paul Dyson, attended and wrote an article about the event which is posted on this website. Noel Braymer photo. 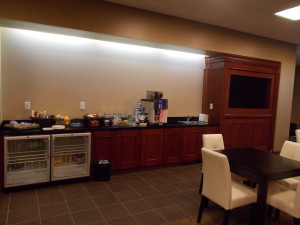 One of the features of the new Metropolitan Lounge at LAUS is the free snack bar available to all travelers that use that facility. Russ Jackson photo. 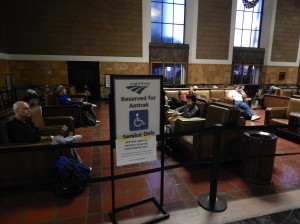 Other news from LA Union Station was the effort being made to keep other than train riders from camping out in the waiting room. This sign says only ticketed riders may sit in this area. It doesn’t say where someone waiting to pick up a rider can sit. Noel
Braymer photo. 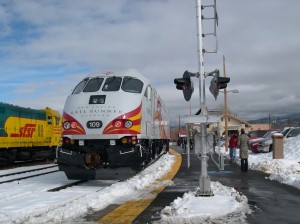 From the Archives. What would winter be like without a photo of a train in the snow? Here a New Mexico Railrunner train waits at the Santa Fe station to depart for Albuquerque and Belen in 2008. Bob Snow photo.