Here are 5 photos by RailPAC photographers. Click on each photo to see it full size! Contributions to this page are welcome. Send your jpg rail photos to RailPAC Photo Editor, at info@xg1.b3e.myftpupload.com. 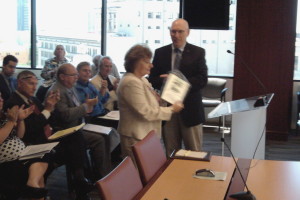 RailPAC President Paul Dyson presented a plaque of appreciation to Jacki Bacharach for all her support for passenger rail in her years on the LOSSAN Corridor Board. The LOSSAN Corridor meeting was held in San Diego on August 23. (Noel Braymer photo) 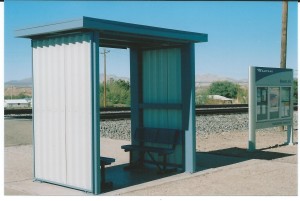 The Benson, Arizona stop for Amtrak’s Sunset Limited now has a new shelter and a new sign at the same location, the Patagonia St. crossing. The new 6 x 8 shelter replaces an old shack that opened only to track side. This one sits on the old pad. Some trains must double or triple stop here to discharge passengers, as well as other stations on the line, because there is no platform. (Richard Strandberg photo) 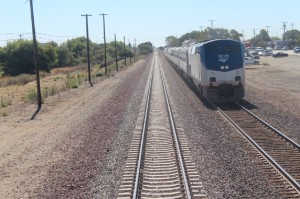 San Joaquin trains 711 and 718 now run with low level cars. This consist for the August 1 first run, seen at Oakley, was Cabbage (formerly an F-40 locomotive converted to be a control cab) 219, 2 Amfleet cars, a Horizon Cafe car, 2 more Amfleet coaches, and 3 of the new Comet cars, with locomotive Amtrak 41. (Robert Heywood photo) 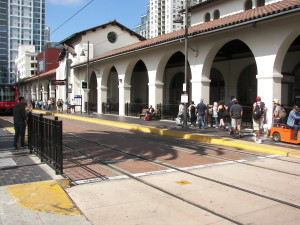 A San Diego Trolley is approaching the downtown San Diego station. The photographer was getting off a Coaster and headed into downtown for the LOSSAN meeting last week and month. This shows the zig zags non Amtrak passengers have to take to head towards downtown or to get into the Depot building because Amtrak closes a gate they have put in when there are no Amtrak trains loading or unloading.
(Noel Braymer photo) 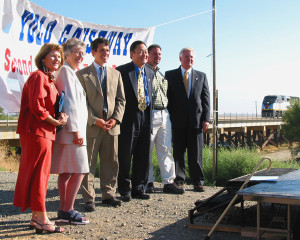 From the RailPAC Archives: This group of officials have dedicated the new Yolo Causeway construction east of Davis in November, 2006. In the group on the right is the Capitol Corridor’s managing director, Gene Skoropowski. At that time, for financial reasons, a crossover was not part of the project, but in 2013 a new crossover is in operation near this site, the only one between Davis and West Sacramento, which makes operations on the line more efficient. (Russ Jackson photo)

previousWhy I am Thankful for California High Speed Rail
nexteNewsletter for September 3, 2013