It’s time we took another look at the continuing saga of the future of the Southwest Chief, which requires action as to whether 1) It will continue on its historic route from Albuquerque to Kansas via the Raton Pass route, or, 2) It will be moved to the BNSF “Transcon” route from Belen, NM to Kansas via Amarillo and Wichita, or, 3) It will be discontinued altogether. The decision deadline is the end of 2014.

That last choice, 3), had been considered not likely until we read Fred Frailey’s column in the July TRAINS magazine and his subsequent blog on TrainsMag.com. Frailey says, in an article titled “Ten trains to ride right now,” that the number one priority for train riders now is to ride the Southwest Chief, as “Absent funding for more than $100 million of track upgrades between Newton, Kansas, and Albuquerque,” the present route will become impractical by 2015. He goes on, “A reroute via Amarillo, Texas and Clovis, NM, is not in sight, either, because the BNSF Railway tells Amtrak it would require as much or more in infrastructure improvements.” Does that put the route decision at an impasse? Probably, because according to Frailey, “state governments this train passes through aren’t willing to offer a dime of assistance.” That pretty much sums up the situation. In the event that the BNSF stands firm on its demand for $100 million (everyone knows the old line needs work and the new line will need platforms and some track adjustments) plus annual passenger standard maintenance cost increases for either route choice, and the states continue to be unwilling or unable to contribute, what is Amtrak to do? Point 3), that’s what. 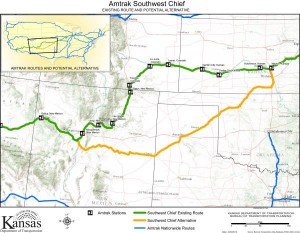 While neither RailPAC, this writer, or Fred Frailey, believe that Amtrak, the states, and the BNSF are at their final answer points (yet), letting the situation go dormant will cause all those concerned to a) use the excuse that the public doesn’t care, or b) believe that Amtrak secretly would like to cut the long-distance trains so why fight it. To deprive the traveling public in the affected areas of passenger trains is contrary to Amtrak’s own stated positions of the benefits of these trains as “Essential Transportation in Rural Areas,” that “Few passengers ride between route endpoints,” that “Long Distance Trains Benefit Local Economies,” and that the national network of long distance trains “ties the nation together.” Having said that, what of a practical matter has been going on “out there?” In January, 2013 a special train was run from Topeka, KS, to LaJunta, CO, carrying invited local officials who inspected the line. In February, 2013 New Mexico’s legislature called for continuance of the present route. In March, 2013 the NM Governor decided to kill off purchase of the 108 miles of rail between Lamy and the Colorado line. In May of 2013 member of the Colorado Rail Passenger Association traveled to Trinidad, CO to ride the train for a day to Las Vegas, NM, and were enthusiastically received at the stations. Press coverage has been positive. In August, 2012 the three states wrote to Amtrak, indicating that state funding “isn’t available,” because in April, 2012 Amtrak had given the states an “ultimatum” to fix the Kansas lines or “we’ll leave.” That ultimatum seems to be contrary to the law that requires Amtrak to be financially responsible to the lines it runs on, and is a dumping of responsibility for national system trains to the states. Any funds Amtrak would be required to pay of its own would have to be diverted from other areas, like the NEC, which of course would be heresy to the Amtrak management philosophy.

What has been happening operationally with the train recently? Well, both trains #3 and #4 travel the route every day of the year, just as they have for decades under Amtrak and the AT&SF. This summer we have noticed something interesting. On the westbound train 3 that departed Chicago on July 25, 2013, the route to Albuquerque was “on time” at each station, or only a few minutes late. It departed Albuquerque on its scheduled departure time, but by the time it arrived in Barstow it was over 2 hours late. We looked at some history, and found that since July 7 train 3 had arrived and departed Albuquerque within minutes of schedule all but on 3 days. Train 4 had arrived into ABQ on time every day. But, train 3 arrived in Barstow late every day in July. Why was the westbound and not the eastbound train so late? We have been unable to find any specific reason, and weather was not a major problem as both trains travel that route mostly at night. Amtrak’s monthly report for June shows “end-point” on time performance for the Southwest Chief to be 71.7%, up from 58.3% in June a year ago, and the “all stations” on time performance in June was 45.5%, up from 30% in June 2012. Oh, yes, they are finally reporting how the trains do between end points.

So, are there any answers to the future of the Southwest Chief? It looks bleak. Right now we have to hope there is action taking place between Amtrak, the BNSF, and the states, but we have not heard of any. Andrew C. Selden says, “they are playing the same game of fiscal ‘chicken’ that they did in North Dakota four or five years ago. The Empire Builder route solution shows how to do this one, too: get local (city) pols to work on their state pols to work on their federal members of congress to share out the cost of fixing the present route, one-third each to Amtrak, BNSF, and the states. And, throw the BNSF a bone by agreeing to abandon LaJunta to Trinidad and send the train via Pueblo instead.” Note: RailPAC’s Jon Messier wrote an article advocating the latter idea in 1984! So, we sit on square one with the Southwest Chief, but everyone must keep an eye on the fact that a decision on the train’s future must be decided eventually.