The Grim Prospects ahead for our Long Distance Trains

The recent court decision to throw out a part of the Passenger Rail Investment and Improvement Act (PRIIA) of 2008 means that the railroads no longer have to give priority to Amtrak Trains on their tracks. This overturns years of precedent which has given passenger trains priority over freight. Since the 19th Century railroads were expected to operate passenger service and give them priority for the public good. Passenger service was never very profitable even in the best of times for the railroads. It was considered part of the cost of doing business to get government approval to operate a railroad.

When Amtrak was created in 1971 it was planned to be run as a private, for profit company owned by the railroads much like a union station or terminal district. To this day stock for Amtrak is largely held by the railroads. The plan was by consolidating operations into a single carrier and operating on the most productive routes that Amtrak could earn an operating profit and save the railroads money. Key to this plan was that Amtrak would have little overhead. For the first few years Amtrak had few employees, no locomotives and owned no tracks or real estate. Most services were provided by the railroads like stations, maintenance and train crews. This has long changed after Amtrak was given the North East Corridor in 1976 as part of the creation of Conrail which didn’t want the NEC and its overhead. 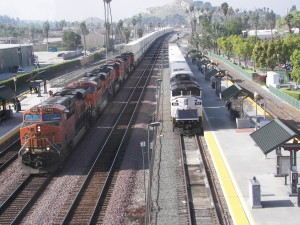 This photo shot this year in Riverside shows the scale of freight traffic compared to passenger for the railroads.  Photo by Noel T. Braymer

A perfect example of Amtrak’s problem being on time happened on July 7th just outside of Richmond, Virginia. The Silver Star with over 200 passengers from New York broke down on its way to Miami. The Silver Star and its passengers were stranded for 14 hours without air conditioning and few working toilets. For the railroads, not only does Amtrak’s mechanical problems delay their trains, but often the railroads have to bail Amtrak out by providing rescue locomotives and crews to tow Amtrak trains in distress.

The reasons behind these problems boils down to money. The fact is Amtrak for most of its history has cut corners on costs, particularly on Long Distance Trains. Often this proves to be penny wise and pound foolish. Amtrak does get money from the Federal Government: recently getting nearly 1 and a half billion dollars of Federal funds. But much of this money doesn’t go directly to Amtrak service and very little of it goes to the Long Distance Trains. Less than 400 million is budgeted for the operating subsidy of all Amtrak’s trains. Over 200 million dollars a year of Federal funds go to pay off old Amtrak debts, much of which goes back to the start up costs of the Acela service which almost shut Amtrak down.

The largest share of Federal money, over $600 million dollars a year is for capital spending on the Northeast Corridor. The recent destruction by Hurricane Sandy highlights how much East Coast commuter rail service is dependent on Amtrak which owns most of the railroad between Washington and Boston. For example most of the rail tunnels connecting Manhattan by commuter trains are owned and operated by Amtrak which had to drain and repair them after they flooded. Most of the rail traffic on Amtrak’s Northeast Corridor is commuter not Amtrak’s.

Trains Magazine’s columnist Fred Frailey in a column dated May 23, 2013 called Joe Boardman’s second-term challenge highlights the lack of progress Amtrak has had improving its Long Distance Rail service. He mentions the failure of Boardman’s efforts to get daily service from the UP for the Sunset. Frailey cites the lack of progress with the CSX to get daily service for the Cardinal despite approval for this by the Amtrak Board. BNSF is pressuring Amtrak and the States to pay 100 million dollars for track repairs between Albuquerque, New Mexico and Newton, Kansas on the route of the Southwest Chief. Without this work the Chief will no longer be able to go over the Raton Pass by 2015. Amtrak had been planning to reroute the Chief on the BNSF line through Armarillo if money isn’t available to repair the tracks of the current route. But the BNSF has made it clear they will charge Amtrak about the same amount before allowing the Chief to run through Amarillo for track upgrades as it will to repair the track on the route through the Raton Pass.

The late Byron Nordberg and Dr. Adrian Herzog foresaw these problems over 30 years ago and they developed a plan to solve them. The solution is a larger network of Long Distance Passenger Trains. This would bring in more passengers and revenue. This would be based on running more and much longer passenger trains and creating sections to serve the maximum number of travel markets while keeping overhead costs under control. Central to this was that the trains produce enough revenue to finance new and additional equipment as well as pay the railroads enough for them to make money and welcome additional passenger train service. This will need a fleet of at least 5,000 Superliner type passenger cars: several times greater than Amtrak’s current total fleet of passenger cars.

To make this happen we will still need government funding for capital improvements on the railroad for passenger trains using the freight railroads. This should be seen no differently than any other transportation capital spending. Just as importantly we need a large enough Long Distance Rail service to serve enough markets and carry enough passenger to operate at a profit while paying their own way on the freight railroads. This is the norm for Long Distance Rail service in most countries. For most of Amtrak’s history there has been no vision to grow the Long Distance Trains into a healthy service. Instead it is often presented as a welfare case and used as a pawn to keep Amtrak’s subsidy by threatening to cut service to different states.