As RailPAC’s e-mail newsletter Editor Noel Braymer has previously reported there is some discontent on the part of the San Joaquin rail board at being allocated two consists of the refurbished “Comet” cars.

The two bones of contention? The age of the cars, as which date back to the 70s, and the access via steps and a narrow gangway. 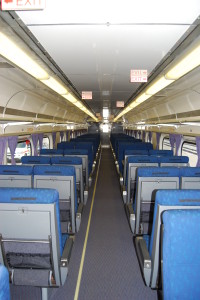 The interiors have been nicely done and, just as with a hotel for example, the building can be old but as long as the bed is new and the plumbing works it really doesn’t matter.

But access does matter, for wheelchairs, bicycles, and just for those of us who are not as nimble as we used to be. A train consisting entirely of Comet cars plus a Horizon café car and a “cabbage” locomotive for baggage and bikes offers no alternative but to climb those steps, and this will inevitably require longer dwell times at stations, and equipment for loading wheelchairs.

We have a suggestion. On storage tracks around southern California reside the first generation of Metrolink cars, bi-levels built by Bombardier and now replaced by the Rotem fleet. These cars meet all current safety standards and have low level boarding, just like the California cars. And like the Comet cars, they were built for commuter service and have seating to match. Our suggestion is a mixed consist of 3 Comet and 2 Bombardier cars, the latter internally refitted with intercity seating, wifi etc. on the upper levels. The lower levels would have either bicycle space or wheelchair space, or a combination of the two. 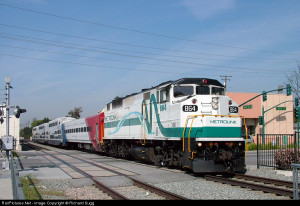 As the picture shows, these cars have already worked together in mixed consists, but with commuter seating. The internal refurbishment could be done by Alstom at their Mare Island, California shop, keeping the jobs and the dollars in California. The Comet cars cost about $1 million each to upgrade, and I’d guess the Bombardier cars would be a little more.

Our proposal demonstrates a couple of points. One is that a passenger car is a hull which can be configured many different ways. We need to be creative if we have rolling stock surplus from one service and shortages elsewhere. Second, why don’t we have a state rolling stock plan that identifies these opportunities and makes equipment available so that we can support the growing demand for both existing and new services?