Amtrak plans to stop Surfliners at Coaster stations too 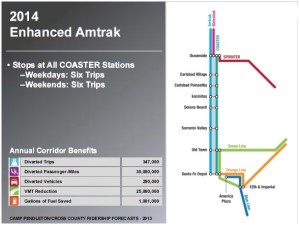 Report and Comments by Noel Braymer, RailPAC 3-newsletter Editor
Amtrak has already listed all the Coaster Stations in the latest April 1, 2013 Surfliner Schedule . It has the footnote : (21) Service begins at a date to be announced. That won’t confuse anyone will it?

This is a really bad idea from North County Transit District to have 3 of the 11 Pacific Surfliners in San Diego County make all the Coaster Train stops and becoming in effect commuter trains. The Surfliners are corridor trains. Commuter trains such as the Coaster work best with lightweight equipment and locomotives geared for high acceleration but lower top speeds than corridor trains. Adding these 5 stops will raise the running time of these trains to almost 3 hours between Los Angeles and San Diego if they are on time. That is a commuter train average speed of 43 miles per hour. Trying to make these extra stops with short distance between them will likely disrupt schedule keeping for these Surfliners.

The most profitable market for the Surfliner is extended service north of Los Angeles up to San Luis Obispo and bus connections to the Bay Area, San Joaquin Valley and beyond. Over a billion dollars has been spent improving the railroad between Los Angeles and San Diego for reduced running times in this corridor. In spite of this running times today are still slower than before 1979! With the future run-through tracks at LAUS, quick passenger loading equipment and no more than 7 station stops with short dwell times the Surfliners should have running times of 2 hours and 15 minutes between Los Angeles and San Diego. That is an average speed of 56 miles per hour and almost as fast as auto travel. What are needed are sweep trains, local all stop trains that meet with faster trains like the Surfliner to allow passengers to transfer quickly from all stations. As it is current Surfliner running times are held back because to make the current 11 daily train schedule older, slower to load cars and long distance train locomotives with slower acceleration are used on some of these trains.

As acknowledged by Amtrak the “morning Surfliner Express” use of this equipment often caused late running trains. The Surfliners would be better off running fewer frequencies but with the proper equipment for faster running times with improved bus connections and travel north of Los Angeles. Some of these Surfliner time slots could be used to run all stop service as a joint Metrolink/Coaster service and equipment between Los Angeles and San Diego. The Surfliners are State supported trains meant to serve the interest of the whole State not just one county. The measure of the Surfliners value is not in headcounts but in revenue. Despite stagnant ridership the Surfliners have been able to increase revenue because of growth in longer distance travel. Under the Rail2Rail program Amtrak will gain the princely sum of $4.25 per head for each Coaster pass rider, riding this train while discouraging trips from San Diego to Los Angeles at $37 and higher for longer trips! Why would the other passengers want to pay $37 for commuter service?

Turning three Surfliners into commuter trains may save one county money to expand its commuter service but cost the State income by discouraging higher income ridership of these trains.