The short answer is nobody knows for sure. The revised draft of this year’s California State Rail Plan (CSRP) was suppose to report on planning for a Blended High Speed Rail System using both conventional and high speed railroads. The current draft of the CSRP says by 2025 there will be 34 daily High Speed Trains between Burbank and Merced with connections at Burbank of 34 trains from Metrolink and Amtrak. This for a project that is not yet funded. But by 2018 there is funding for 130 miles of new railroad built for high speeds though not funded for electrification. This new railroad will be used by some express San Joaquin trains at 125 mile per hour speeds until there is money to build an electrified High Speed Railroad between Merced and Burbank no sooner than 2022. 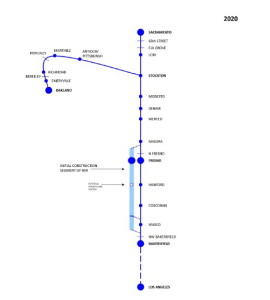 A Caltrans graphic of rail service in the San Joaquin Valley by 2020. Left click twice to enlarge all graphics

So how many San Joaquin trains will use this new railroad with only one station, a new one at Fresno between Madera and Bakersfield? It could be 9 or 14 or any number in between. The current draft of the CSRP doesn’t have information about what the running times will be for the express trains from Bakersfield to either the Bay Area or Sacramento or about what connections this service will have. What plans are known is that of the now 4 Bakersfield to Oakland trains, 3 of them will be expresses with only one San Joaquin making all stops. At Madera some express trains will catch up with new local San Joaquins which after stopping at all stations north of Bakersfield on the BNSF will terminate at Madera so passengers can transfer to the express. To achieve 14 daily express San Joaquin trains will require the cooperation of the Union Pacific. Union Pacific cooperation will be needed if there are 5 Bakersfield to Sacramento express trains and not just the current 2. So what could happen if the UP doesn’t cooperate? Four round trips are being considered running past Madera all the way on the BNSF to Richmond. There is no discussion of at least in the current draft of the CSRP of how passengers will make connections at Richmond to other places in the Bay Area.

There are ways to make Richmond a viable terminus. The old right of way and parts of the old Santa Fe Pier used in the past for ferry service from Richmond can still be seen on Google Satellite Maps. With direct ferry service from Richmond to San Francisco and other destinations this route would have a chance to work. Also bus connections to the Richmond BART Station would connect passengers to BART or to Capitol Corridor trains for connections to Oakland and San Jose. To make this work the schedules of the express San Joaquin and Capitol Corridor trains have to be coordinated with through ticketing. It would be better to interchange cars between express San Joaquin and Capitol Corridor trains but that would also need cooperation of the UP.

A major part of the planning in the San Joaquin Valley are connections at Merced. Plans calls for a replacement Merced Station which will be on the west or UP side of town. A track connection is planned to extend local San Joaquin trains from Madera on the BNSF to this new Merced Station to connect with new services as well with future High Speed Trains which will terminate at Merced hopefully by 2022. There are plans for 10 trains by 2025 in the CRRP between Merced and Sacramento. Of these 6 would use the existing BNSF and 4 the UP north of Merced. Also there are plans to run 6 trains on ACE from Merced to San Jose by 2025. Four of these trains would run on the BNSF and the other 2 on the UP. This is in addition to the 4 trains now running from Stockton to San Jose on ACE which might in the future have direct connections with trains on the BNSF.

All of this planning hinges on the cooperation of the UP. The State Rail Plan has for years been planning on creating a Coast Daylight with Coast service between Los Angeles and San Francisco. Also planned are additional trains between San Diego and San Luis Obispo, service to the Palm Springs area, extending the San Joaquins to Redding as well as extending Capitol Corridor trains to Reno and Salinas. These are all good projects and should have been done years ago. The only reason most of these haven’t been done yet has been the unbending opposition of the Union Pacific. The fact that Richmond is being considered as an alternative terminal for the San Joaquins strongly suggest that the UP’s position hasn’t changed which is to oppose any new passenger rail service on their tracks they are not legally obliged to carry. 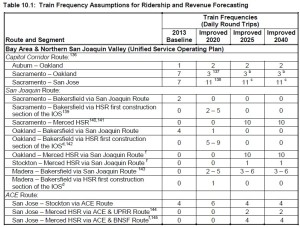 From the CSRP of proposed rail service levels in the future

Even with 5 connecting trains that leaves 4 express trains without local feeders and for many people in the San Joaquin Valley a diminished level of rail passenger service by being forced to transfer between trains without increased train frequencies. This problem will be worse if there are only 2 connecting local trains. A common problem with express service is the time saved often doesn’t increase ridership enough to replace those lost by skipping stations. Express service has been tried 3 times over the last 30 years between Los Angeles and San Diego and all three times ridership and revenues dropped . We don’t know how much time will be saved with these express trains. There have been plans for years to increase the running speeds of the San Joaquins from 79 to 90 miles per hour. To increase the number of trains and run them on the BNSF between Madera and Richmond will no doubt require track improvements and extra double tracking. With express trains and faster running times north of Madera over an hour running could be cut on trips to the Bay Area and Sacramento. But that is no reason to bypass residents in the San Joaquin Valley. Many countries with good rail passenger service would simply combine local and express trains at Madera rather than making passenger change seats. This is more comfortable for passengers, it would attract more passengers and would be faster if done right than having people change trains.

There has been no discussion of new bus service, particularly to Southern California for these new San Joaquin trains. Bus ridership has been critical to the success of the San Joaquin trains so far. To fill up these new train seats more and better bus service will be needed to serve the entire State. The first train from and last train to Bakersfield shows how important connecting buses are. These trains get a great deal of ridership from buses. These buses are often nearly full by the time they get to or leave San Diego County and people ride these buses at the wee hours of the night. Many of these bus passengers travel very long distances on bus and train. In comparison the ridership of the second train out of Bakersfield and the next to last train to Bakersfield ridership is lower. This second set of trains travel in and out of Sacramento. They also lack bus service south of Santa Ana. Expanding bus service with faster connections needed to Metrolink and Surfliner trains will have to be planned now to be ready by 2018. The same holds true for better connections to all the bus routes already on the San Joaquins. Extending the buses to Marin County up to Eureka from Martinez will need to be extended to Antioch to serve Richmond bound trains. New bus service at Merced could provide connections to Gilroy up to San Jose and also be used for buses to Salinas and Monterey. Improving bus connections would also increase support for high speed rail because more of the State will benefit from it and have a stake in improving it. 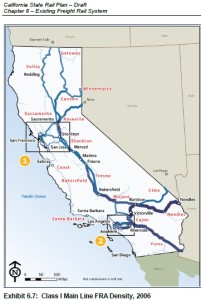 A CSRP graphic showing freight traffic in California with the thickness of the lines showing traffic density. Note how thin and light traffic is on the UP Coast Line.

The biggest problem with improving rail passenger service in California is the UP. Despite minor freight traffic on the Coast Line, a line the old SP in the 1990s would have loved to sell to the State, the UP has dragged out negotiations for years to extend one existing round trip from San Luis Obispo to San Francisco. Even where there is heavy freight traffic other railroads are able to mix passenger service on their main lines. A good example of this is on the old BN Mainline in Chicago. With triple tracks for greater capacity and letting faster trains get around slower trains the BNSF is and has been able for years to run a busy commuter rail service on the old BN Mainline and make money doing it under contract with the Chicago commuter rail agency. Between Fullerton and Los Angeles Metrolink and Amtrak share the BNSF Mainline to Chicago. This line in the next few years will be fully tripled tracked and fully grade separated which will allow more passenger trains. After that is done work will begin to build a fourth track. With double tracking just for passenger trains and separate double tracking for freight it will be possible to have more and faster speeds for passenger trains and high track capacity for freight. Government is paying its share to make these track improvements for passenger service to avoid interfering with freight traffic. Most major railroads have room for 3 and often 4 tracks. Most freight lines are single tracked and can carry large amounts of freight with few trains because the trains are very long. Generally only major freight mainlines need to be double tracked. The railroads including the UP have benefited from taxpayer funded improvements yet at least with top management at UP negotiations for passenger rail service go nowhere for years. 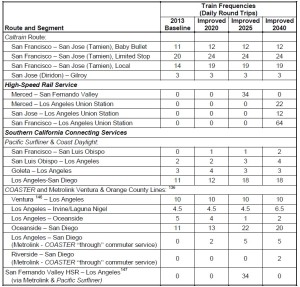 There is an emotion that brings about change to people and organizations which is stronger than love, hate, joy, anger, fear. guilt or sadness: it is embarrassment. Powerful people and organizations spend fortunes to create a good public image and to cover up embarrassing stories of scandal, failure, mistakes and criminal activity. However when these efforts fail and exposure creates a bad public image even the most powerful are unable to control their fate. A good example would be the results of the 2008 Metrolink crash at Chatsworth after 25 people died when an engineer went past a red signal and crashed into a freight train while he was disobeying Metrolink rules by texting messages on his phone. The embarrassed reaction by local leaders was to increase funding for Metrolink to improve rail safety and to fire the chief executive of Metrolink. It also lead to congress passing legislation despite the objection of the railroads to mandate the installation on most railroads of Positive Train Control to prevent accidents on the tracks. Hopefully a disaster won’t be needed to open honest negotiations with the UP over improvements needed to safely and efficiently expand passenger service and to pay the UP for this. But it will likely need pressure and lots of bad publicity until the UP decides that the line of least resistance will be to negotiate in good faith.

Footnotes from the charts by the CSRP

139 Trains operate on the first construction section of the IOS between Madera and north of Bakersfield.