Photo and Comments by Russ Jackson 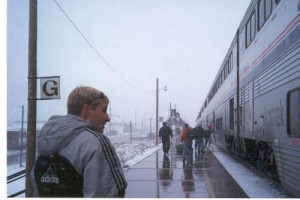 One of our classic photos is the westbound California Zephyr #5 at Winter Park, Colorado in the winter of 2000.

The Thanksgiving weekend saw the start of Amtrak’s annual battle with winter weather, and nowhere was it more evident than along the route of the Empire Builder. Train #8 (22) departed Seattle 3 hours and 20 minutes late and finally arrived in Chicago 3 days later, 20 hours and 8 minutes late due to storm conditions across Montana and North Dakota. Along its route it went from just under 7 hours late at Cutbank, MT, to 13 hours late out of Havre. The California Zephyr #5 (22) departed Chicago 3 minutes late, and was only 54 minutes late out of Salt Lake City, ended up 4 hours and 24 minutes late into Emeryville after losing almost 2 hours between Truckee and Colfax. Coast Starlight #11 that departed Seattle on the same day 1 hour and 43 minutes late was 4 hours late out of Tacoma due to mechanical problems, not the weather, but #14 that departed Los Angeles on time that day and was 23 minutes late into Dunsmuir ran into the Cascades winter weather and was 2 hours and 40 minutes late out of Klamath Falls. Meanwhile, the Sunset Limited and the Southwest Chief continued their pattern of excellent on time performance, arriving early at their endpoints consistently.

. . . Let’s look at some of the “routine” problems encountered by long distance trains last month. Train 3 (13) was delayed over 2 hours at Peach Springs, AZ, because it set off a drag detector due to a broken strut and sheared bolt on a coach. The BNSF was able to help that one. Train 11 (13) was delayed departing Seattle for 95 minutes because inspection revealed a faulty toilet vacuum pump in a Sleeping car. (Where have we heard that problem over and over before? At least it was corrected prior to departure.) Train 6 (12) was delayed 45 minutes 35 miles east of Green River, UT due to a locomotive “not loading.” (Another regular problem.) Train 21 (11) the Texas Eagle, was delayed 2 1/2 hours near San Antonio due to “losing traction power” on locomotive 81. The Union Pacific provided a helper locomotive. But, the train was delayed 3 hours more at San Antonio “swapping locomotives”, due to a horn problem on the freight locomotive and toilet problems on train 22. Then Train 1 was delayed another 2 hours at Deming, NM removing that freight locomotive because it had “bell and whistle problems and lateral motion.” Another freight locomotive was taken off an eastbound freight train and the Sunset continued to Los Angeles. And, Train 4 (13) was delayed over 2 hours at Albuquerque as a result of having to switch the rear car and another coach on the rear of the train due to bad ordered marker lights. It takes much patience to run a railroad, particularly when many problems can be prevented but are not.

. . . Thanksgiving weekend was sold out on Amtrak! On Wednesday, November 24, one of the busiest travel days of the year, NBC TV stationed one of their top reporters, Mike Taibbi, at New York’s Penn Station and through the day he provided information to all of their networks, the Today Show, MSNBC, CNBC, and the Weather Channel. There was parity for rail travelers with air and highways at last! Mr. Taibbi reported after interviewing train riders that with the controversial TSA “patdown” procedures in effect at airports there was definitely more interest in rail traffic. He went on to say that since all trains were full a reservation was a must, that Amtrak had every available car running, and was serving turkey in its long distance train dining cars. That summed things up rather nicely! Elsewhere that day, the Capitol Corridor added cars to its consists, some with 7 cars, and borrowed a set of Caltrain equipment (Gallery cars), running that consist on trains 542 and 553 with limited snack service! Some Surfliner consists had 9 cars, and there were 5 cars including the Great Dome on the low level train to San Luis Obispo. While it is difficult to pinpoint how many travelers took Amtrak rather than flying this year, a New Orleans TV station, WWL, interviewed four passengers waiting to board a full Sunset Limited and the result was mixed. Amtrak spokesman Todd Stennis told the station, “I think that (those TSA screenings) played a role” in a jump in ridership.

. . . More on the weather and other things. . . . Did you see the excellent article in the December issue of Trains magazine about snow removal on Donner Pass? It says, “When the rotaries (plows) move out of Roseville, (enroute to the Sierra) workers have to pull up crossings and remove the Amtrak station platforms at Rocklin and Colfax to accommodate the plows. The platforms were designed to be portable because of this.” We didn’t know this, so we asked our Sierra correspondent, Ralph James (who is busy shoveling out his property these days), who says, “Colfax would only have one platform on the #2 track but Rocklin would have a platform on each track. With CTC cross-overs at Rocklin, Newcastle, Bowman and Colfax (west of the platform and in the wrong direction to avoid the platform) it would be possible to get by with removing only one platform in Rocklin.” Isn’t railroading interesting? . . . A new $7 million crossover at the West end of the Yolo Causeway was one of California’s federally funded projects. Construction should begin soon to increase efficiency between Davis and Sacramento. CCJPA Managing Director, David Kutrosky, says they are still in negotiations with the UP. That leads this writer to finally in this issue report that negotiations with the UP on the daily service for the Texas Eagle-Sunset Limited are still going on, as best as we can determine, but no decision. As the agent in the Austin, Texas station told us last month “you probably know more than we do.” . . . The Union Pacific has “re-ignited” its double-tracking effort on its 760 mile El Paso to Los Angeles Sunset Route, putting in $18 million to complete nine miles in Imperial County, California and another nine miles in Maricopa County, Arizona. It just gets easier to operate the Sunset Limited daily. . . . The American Society of Civil Engineers recognized the rehabilitation of the Cal Park Tunnel between San Rafael and Larkspur on the future route of the SMART trains as the “Outstanding Small Project of 2010”, and we extend congratulations! The tunnel has been rebuilt and now contains a bicycle-pedestrian pathway, so when construction of the rail line commences the tunnel is ready. After reading RailPAC Secretary Dick Spotswood’s article about the future of the SMART project that tunnel may wait a while before it sees trains. . . . Congratulations are in order, too, to Metrolink’s SCRRA Board for unanimously agreeing to buy 20 more train cars from Hyundai Rotem for $1.68 million each, about $1 million below market value! Now, if Metrolink can come up with money like that why has it taken so many agonizing years for Amtrak to come up with the cash for any new western long distance cars? Where there is a will there is a way. . . . All that’s left now is to wish our reader/members a Happy Christmas Holiday! See you on the rails next year!