What Happens if the Southwest Chief is Rerouted? 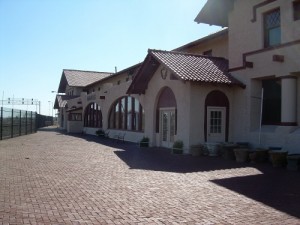 Would Amtrak return to the historic Amarillo, Texas station used by the AT&SF "San Francisco Chief"?

Every once in a while the rerouting Amtrak Trains 3 and 4, the Southwest Chief, off the traditional line from Albuquerque, New Mexico to Hutchinson, Kansas arises, because the line has almost no BNSF freight traffic in Colorado and New Mexico any longer. That is a true statement, the railroad no longer uses it and has diverted through freights to the soon-to-be fully double tracked “Transcon” line farther south which was the historic route of Santa Fe’s San Francisco Chief prior to Amtrak. In recent months Amtrak has been forced to add 40 minutes to the Chief’s schedule due to a BNSF lowering of the speed limit on the very rough trackage in western Kansas and Colorado. Train 4 now departs Los Angeles at 6:15 PM. The BNSF has offered to move the train to the Transcon line, which as we will see is more populated. The State of New Mexico now owns the line within its borders and runs the very successful Railrunner trains on the portion south of Santa Fe to Albuquerque. The BNSF still owns the rest.

So, what would happen if Amtrak must abandon the line? 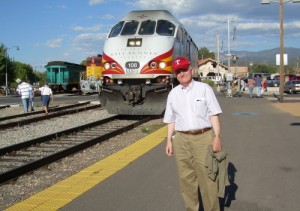 The New Mexico Railrunner could take passengers from Santa Fe and Albuquerque to connect at Belen. The author is shown at the Santa Fe train station.

Would New Mexico pay to maintain the line through Raton Pass? Would Colorado step up and pay to maintain their portion of the line? Would Kansas pay? Would a “short line” purchase it knowing there are almost no freight customers? Would Amtrak pay a higher share of the maintenance? Would anyone pay to rebuild it? Would the BNSF pay for a portion of an abandoned line? The answers to these questions are likely to be “No.”

So, what would be lost in a reroute? Certainly there is the loss of the “absolutely spectacular and uncomparable” scenic route through Raton Pass as stated by URPA’s Bruce Richardson, “but how many millions of dollars a year in track maintenance is that scenery worth?” In this case economics will eventually govern the results even though Amtrak CEO Joseph Boardman has said he is “not interested in” moving the train. Here are the FY 09 Amtrak ridership and revenue statistics for the abandoned towns, but not including Albuquerque as that ridership could be largely retained by having the Railrunner act as a shuttle to Belen, avoiding Amtrak having to back up into Albuquerque. 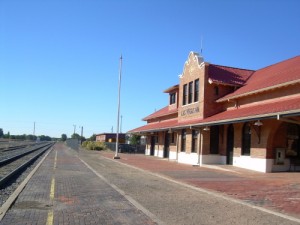 To Amtrak Accounting that might be “chump change,” but to the people who live in those towns and use the train it can be a matter of life and death just as was the case for the Empire Builder across North Dakota and Montana. Yes, there is also a human cost. On my October trip to Northern New Mexico I stopped for a visit at the Las Vegas, NM, Amtrak station, which is not staffed by Amtrak but is the city’s nicely restored Intermodal Facility in its Historic Railroad District. Employees handle questions about Amtrak travel, and there is a Quik-Trak ticket machine. Transportation Facility Manager, Debra Trujillo, was aware that there was talk of a potential loss of the train, and expressed concern for her town’s people, many of whom are Senior citizens who would have no transportation alternative. Greyhound does not serve the town. She said many people ride the train to Albuquerque for medical appointments, or into Colorado to visit relatives. While dealing with Amtrak can be difficult, she is looking forward to the (ARRA) stimulus money-funded new ADA-compliant platform, although as of the date of my visit construction had not yet begun. I urged Manager Trujillo to let Amtrak and the political establishment know how important the train is to her city, and to muster the other cities on the route to do the same.

What would Amtrak gain by rerouting the train? Many observers felt Amtrak should have also retained the San Francisco Chief when it began in 1971. To go into these towns now would mean that they would be starting over selling rail passenger service after 40 years of absence. Here are the current populations of the new station cities, not their metro areas. It’s not a prediction of ridership, but one can certainly see the temptation to reach out to new customers. The towns listed below are not all the stations that were served by the Santa Fe’s train, but are the most likely stops: 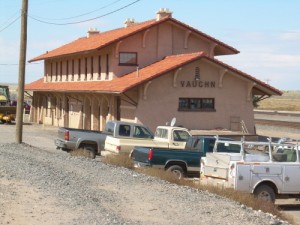 Eventually the decision may be out of the hands of either the cities, the railroad, or Amtrak. That would be unfortunate and probably be a big black eye for all. The BNSF’s Joseph Faust told the Amarillo Globe-News on October 8 that Amtrak is free to use the freight tracks in Amarillo, but that option “would require a great deal of study.” The historic passenger station is used by an auction house, but is still standing as is the brick platform. Amtrak’s Marc Magliari told the newspaper that “Right now (the delays) are not significant. Our intention is to stay on the current route.” This writer urges all parties to work to preserve this service area and work to restore the San Francisco Chief into the Amtrak long distance system. Yes, to San Francisco from Barstow up the San Joaquin Valley. That would be a bonanza for Amtrak ridership and revenue. Years ago the Amtrak agent in Stockton told me that he could fill a sleeping car on the train every day in the old days. Think future, Amtrak!