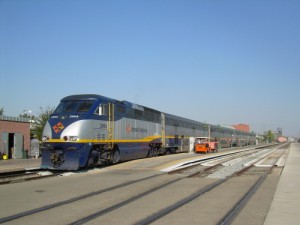 The San Joaquin in Bakersfield

Photos and Commentary by Russ Jackson

. . . There’s great news for San Joaquin riders. On July 26 Amtrak announced that on six of the twelve daily trains that now operate with four cars, a fifth car will be added to the trains through Labor Day, increasing capacity by 25% and allowing an additional 88 passengers to ride each train. Ridership growth on the trains between the Bay Area and Sacramento to Bakersfield has grown steadily and in 2009 the service had 977,000 passengers, making it the fifth busiest route in the Amtrak system. This additional capacity could push the ridership to one million for the first time.  Good thinking, Caltrans, this is positive equipment usage!

(NOTE: On August 6 San Joaquin train 714 with one of the 5-car sets collided with a truck at the Shafter crossing, just north of Bakersfield. The push train remained upright, but 10 passengers were injured.)

. . . Again speaking of the Sunset Limited. Still NO word on the daily service! So, on to other items regarding #1 and #2, but also the Crescent and City of New Orleans. Service to New Orleans was disrupted the weekend of July 23 with the approach of Tropical Storm “Bonnie.” Service was “truncated” so the trains could be serviced short of their New Orleans maintenance base. The Sunset was canceled at San Antonio, with Houston passengers put on “Motorcoaches.” The Crescent was held at Meridian, MS, and the City of NOL at Jackson, MS. The storm did not reach the predicted severity, so full service was returned quickly. And, a correction from last month’s column: we identified Bernal, NM as being North of Las Vegas, but it is just South. That is the correct location of the BNSF washout on the Raton Pass line of the Southwest Chief, which is once again running through without delay. Guess so: In July the Chief was only late a few minutes at its endpoints. Thanks to RailPAC Associate Director Ken Ruben and to Don Winter, who caught the error. Mr. Winter observed the site during his trip on a train that went through it after repairs were completed and the line re-opened. 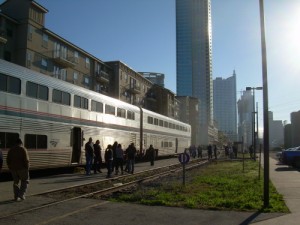 Superliners at Austin, Texas, on #22 the Texas Eagle
. . . Speaking of the California Zephyr. RailPAC contributor, Ralph James, observed the following at his Sierra Nevada home: “Today both #5 and #6 had four coaches in the consist instead of the normal three. I saw one consist last week some time that also had four coaches. Don’t know if it’s a Reno coach (as was done in years past) or if it is going through to Chicago. It has happened often enough that I am fairly sure the car is in service and not just deadheading.” We forwarded his questions to Gene Poon, who replied: “The coach is going through to Chicago. I think it only runs three days a week. There isn’t going to be a Reno coach, either. Actually, operationally it would be a Sparks coach, since that is where the switching would be done. But Amtrak doesn’t want to do any switching at all, and doesn’t want to pay UP for a storage track at Sparks. UP knows how slow Amtrak is at switching and does not want Amtrak cluttering up the tracks at Reno with a switching move there. And Amtrak does not want to pay UP for a switch job which would have to stop what they are doing in time to stand by at Sparks waiting for Amtrak to show up, run from Sparks to Reno and then back, each time a coach is added or removed.”

. . . Amtrak placed its order for 130 new rail cars in July. That sounds great, right? It is until you consider that 80 of those cars will be replacements for ancient non-revenue “heritage fleet” baggage cars. Did you read the July and August issues of TRAINS magazine? To highlight how things have changed yet remain the same, the two part article, “Adventures of an Amtrak on-board service director,” by Dale Jenkins, showed how desperate Amtrak’s need for new equipment was in the earliest days of the 1970’s when Amtrak was getting started. The equipment operational problems were legendary. While that was mostly corrected with the arrival of the Viewliners, Amfleet and Horizon cars, the Superliners in the 80’s, and Superliner II in the 90’s where has been any interest by Amtrak in buying new cars on the long distance trains? Until now. The rest of the newly announced car purchase from CAF will be new Viewliner sleeping and dining cars. Low level equipment, which means they will operate only in the East and Midwest. Amfleet, Superliner, and Horizon cars are a lot newer than the equipment these new cars will replace, but we must ask again why Amtrak has not already ordered fleet expansion vehicles for the much-in-demand western long distance trains. Coincidentally, Andrew C. Selden writes that in late May Boeing announced it has a backlog of confirmed orders for its 737 aircraft, numbering more than 2000, and they are increasing production of them by about 10%. These are the aircraft that most directly compete with Amtrak in the 500 to 1500 mile markets. Airlines are responding to demand, but where is Amtrak, what with the Superliner trains selling out weeks and months in advance? RailPAC President, Paul Dyson says, “I think we are right to ask the questions as to why the Amtrak order is made up as it is. It seems to me that only in an extreme situation would a company invest so much of its hard won Capital budget in non revenue assets.”