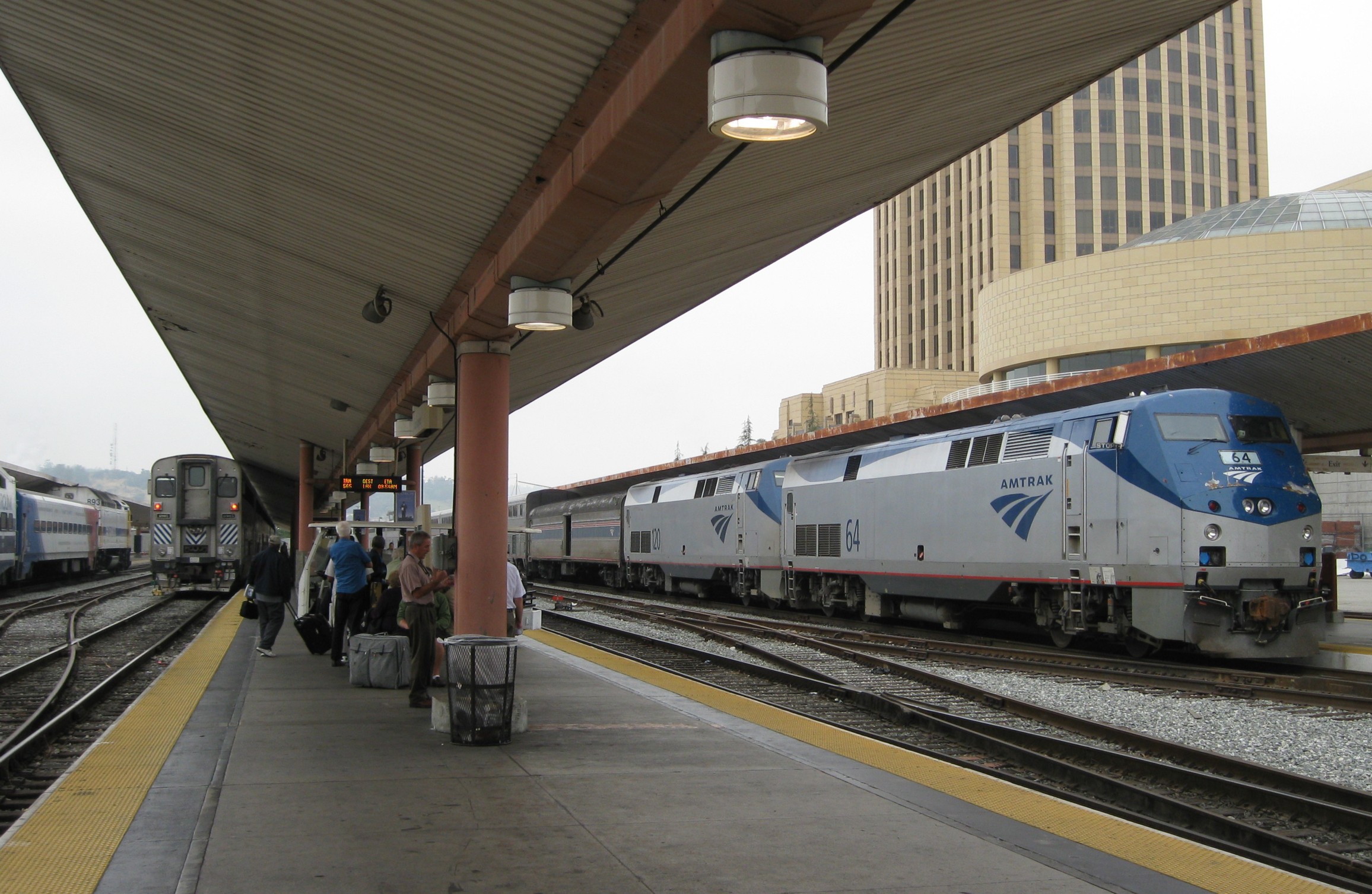 Trip on the Sunset Limited from Los Angeles to Yuma 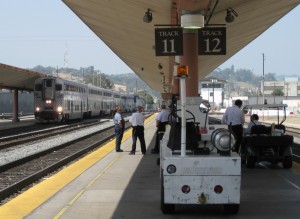 My work sent me on an assignment to Yuma, Arizona for two days, May 19-20. As luck would have it I was able to work my visit around train times – it also helped that there is limited LA – Yuma air service. (Side note: the locals said they usually drive to San Diego or Phoenix for flights. Either drive is 3 hours for them).

I had checked the Sunset’s recent on-time stats and they had been excellent. And so… I got to LAUS well before the 2:40 scheduled departure; the departure would be “on time” per the large lighted schedule board. Out on the platform, some luggage and express packages were staged for loading. (photo above) The crew showed up about 2:20, and then everyone waited. And waited. 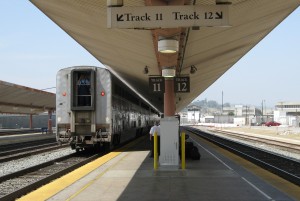 The trainset finally backed into the station at 3:00pm; (photo left) we did not depart until 3:45. Finally, somewhere near Fontana, we got up to speed. By then I was enjoying dinner – New York steak – amazingly good. At my table was a person traveling to Maricopa, and a couple from Canada doing a large circle tour on Amtrak (Empire Builder, Coast Starlight, Sunset, Crescent, Capitol Limited, Empire Builder – starting and ending in Grand Forks, ND, and including a 2-week break in Charlotte for Nascar). The food was good – the service ok – but settling the check took forever… 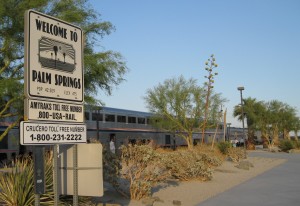 After the Palm Springs smoking break we got up to speed but then stopped in Indio. The lounge attendant had placed an urgent call for the conductor. It turns out an underage person had become intoxicated in the lounge car, and fell and hit his head. He was out cold (I did not see him), and the ambulance was called. We sat there over an hour – the EMT’s (photo below) could not get a stretcher up the stairs in the lounge, so they had to remove a window and get the man out that way. It was dark by the time we left Indio, and we arrived in Yuma about two hours late. 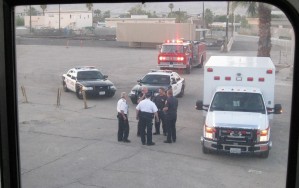 Here’s the return trip: Yuma – the “station” is long gone – burned down in the 1990s (it had been converted to an art exhibit center anyway). The current platform is between the two main tracks opposite the Union Pacific’s crew office for the freight trains; Yuma marks the western edge of UP’s Tucson Division. Amtrak passengers access the platform through a tunnel next to the crew building. (photo below) 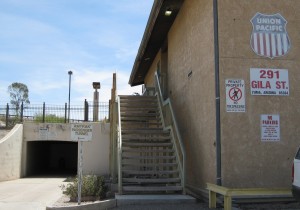 All freight trains stop at the office to change crews; Amtrak passengers wait on outside benches and catch all the “action”. It’s a fascinating place for railfans, but most of the general public would likely prefer a waiting room. There is no canopy – maybe it’s a good thing Amtrak comes through at night when it is cooler. Per Amtrak’s “Julie” the train was about 90 minutes late when I called; that eventually extended to 2 hours late. Good enough. There were about a dozen passengers waiting, waiting…and about a dozen UP crew members! Turns out UP crews “hitch a ride” on the Sunset to get back to Colton yard, where they are based. 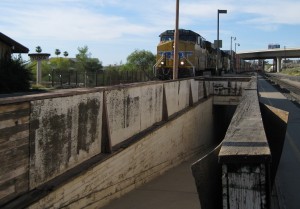 A UP freight (photo left) entered the Yuma station, coming off the bridge. One mentioned that UP is exploring how to get a second track across the Colorado River. The current single track passes through Quechan Indian Tribal lands, and the tribe is not open to granting a wider easement to allow a second track [it is double track either side of the bridge].

There isn’t much open in Yuma at that time of night, but anyway, the train arrived at about 4:40am (about 2 hours late). Once we got going, the speed was much more impressive this time, and the track through Imperial County is still rough! There was a slight delay in leaving Palm Springs – waiting for a freight – but other than that the pace was much more in line with what I expected. 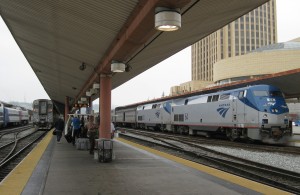 We got into LA at 9:35am – enough time for people to make their Coast Starlight connection at 10:15am. (on the track at the right in the photo) Those with baggage likely missed the 9:40am departure of the Surfliner, but at least they had later options. Would I do it again? Maybe – depends on my work schedule. The lack of announcements on the eastbound was frustrating – it doesn’t get us there any faster but at least lets us know what is happening. NOTE: This report was first published in the June issue of the Western Rail Passenger Review as part of the Tracking Rail News column.