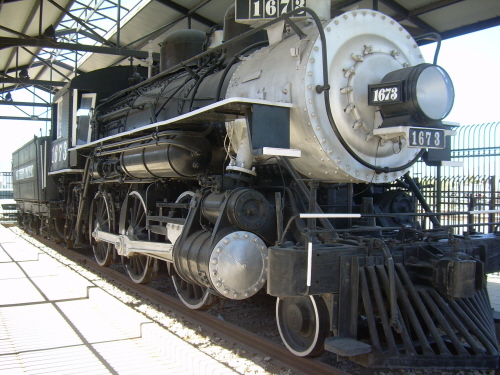 Photos and Commentary by Russ Jackson 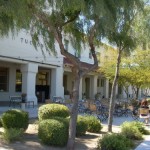 . . . On Time Performance. As usual, we start with some current facts, and then take an historical look at the Amtrak Western long distance trains. The Sunset Limited fell back slightly in March, but is still above 90% since October 1. Its companion, the Texas Eagle, also fell back to an acceptable 77%. The Southwest Chief is at 86%, the Empire Builder is 77%, the Coast Starlight is 88%, and the California Zephyr still struggles at 58% for end-point OTP. RailPAC correspondent, Ralph James, reports from Blue Canyon in the Sierra Nevada overlooking the UP main line that Zephyr #5 can be as much as 2 to 5 hours late while #6 is normally only several minutes down. Also, recent consists are back to three coaches after a few weeks running with only two. Now for history: According to the Fall, 1979, “CRC News”, the predecessor publication to this one, in “July, 1979 the OTP for the Starlight was 37.1% compared to 69.4% in July 1978; the Sunset is down from 50% to goose eggs; the Zephyr goes from a fatal 12.9 to an atrocious 33.9%.” What else is new?

. . . More RailPAC History and the Sunset Limited from the 1979 newsletter. With the April 17, 2010 meeting in Los Angeles upon us, the Fall, 1979, newsletter reported on the October 12-14 “CRC Conference” held in San Luis Obispo. One of the speakers was a familiar name: “Art Lloyd from Amtrak” spoke on “Amtrak after October 1,” and “he was frank about Amtrak’s problems but he saw promise in several positive developments like multi-year funding, staff improvements, etc.” Art also presented a “tentative Superliner inauguration timetable for western trains,” as the previous day was the official Superliner rollout in Chicago. CRC called for a seventh San Diegan and a second San Joaquin! The new 1979 Superliner dining-car menus were unveiled, “with a somewhat wider and more enticing selection than at present, with stuffed Breast of Chicken, Continental Rice, Garden Vegetable; Prime Rib, baker or Whipped Potato; Fresh Rainbow Trout, Crabmeat Stuffing; and Ham Steak, Pineapple Ring.” Sounds mighty good! CRC would be “forming a coalition with TexARP to improve on-time performance and upgrade to a daily frequency the Sunset Limited.” See how long we have been working on this? That work continues to this day, and even though Amtrak officials in 2010 say “when” it goes daily instead of “if,” it hasn’t happened yet and won’t happen for 180 days after the deal is final so they can “train crews.” Earliest date of startup of the daily train is the October timetable change. As RailPAC-ARPA’s Bill Lindley said, “We are all awaiting official word; it will be a big story once it breaks.” The current best guess is that New Orleans will be the crew base for the new train from San Antonio. Howard Bingham in Houston says, “The (NOL) hotel Amtrak is using must be rolling in money, as the Sunset crew (now) sits there 3 days with the equipment collecting dust.” In an official statement from Amtrak, the daily train to the West Coast “would trim transit time by seven hours, increase ridership by more than 100,000 and improve financial performance.” Haven’t we been saying that since 1979?

This writer traveled through Arizona in mid-March, this time by car, which would be needed at our destination, and we had no inclination to put up with the isolated Maricopa Amtrak station in the middle of the night in order to get into Phoenix to watch Spring Training baseball! 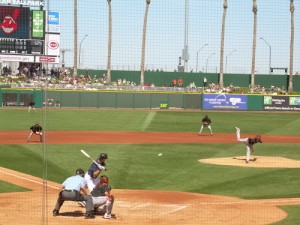 We noted, in addition to the information about the small stations along the Sunset Route (see separate photo story), that UP freight traffic has decreased considerably so the Sunset Limited’s great OTP is certainly justified. 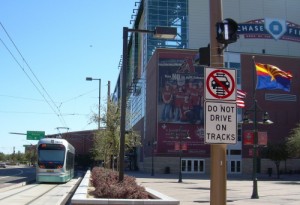 In Phoenix we were impressed with their “Metro” light rail line that runs from west of Phoenix to Mesa on the east side, passing the baseball park of the Arizona Diamondbacks. The UP freight trains move on tracks on the opposite side of the ballpark, so when that state finally gets its commuter train system that will be a big destination. New ridership figures are very positive for the one-year-old light rail system, according to Bill Lindley. January and February saw double-digit increases in total monthly boardings: 43,509 weekday riders in February 2010, a 23% increase. 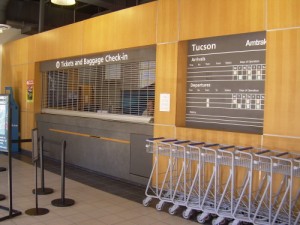 Although we saw it from the train in January, we also were impressed when we visited the Tucson train station, with its rebuilt interior and waiting room, 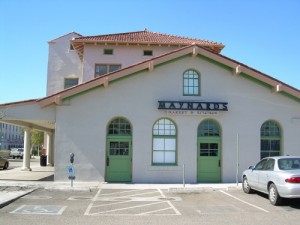 the new market-deli-bar in the east end where SP’s offices were, the landscaped outdoor patio eating area, the SP steam locomotive display, (photos at the top of this column) 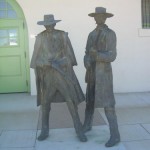 and statues of Wyatt Earp and Doc Holliday from the old west! 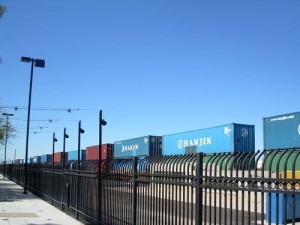 A steel fence separates the patio from the tracks, with the gates open only at Sunset Limited train times. One of the historic passenger tunnels to the tracks can be seen through the fence. RailPAC-ARPA member Richard Strandberg in Tucson, says there is room for a “pocket track” to accommodate both the Sunset Limited and future Arizona commuter line. It will be interesting to see how Amtrak changes the arrival-departure times in Arizona when the Sunset Limited goes daily. The next goal will be to return it to Phoenix.

. . . What’s New and two trip reports. RailPAC Associate Director, Anthony Lee, found the following which presents an intriguing look at passenger rail equipment of the future: “The Swiss have decided to go with Tilting Double-Deck EMU for their next generation of Intercity passenger trains. They will be ordered in two different lengths to allow different capacity depending on time of day. These will be the first tilting Double-deck stock to be built for any railway. Fifty-nine EMUs are to be in the initial order. The RFP has been issued with responses due this summer. The order is to be placed this Fall. This Swiss expect to need time to work out bugs in the totally new trains, so the first EMU is to be delivered early to allow 9-12 months of testing.” … Minnesota ARP’s Andrew C. Selden “back from a trip to Essex, MT on 7 and 8. My observations are: 1. If Amtrak were entertaining starting service today over the BNSF track between Fargo-Grand Forks-Minot, it would reject the idea out of hand. This track is dreadful. It keeps everyone awake most of the night, and leaves a most unfavorable impression of overnight train travel. (Note: to say nothing of spring flooding). 2. Amtrak’s Seattle crews were the best I have yet encountered. Car attendants, dining car staff and lounge attendants were uniformly exceptional. This proves it CAN be done. 3. Amtrak’s rolling stock on what is supposed to be its premier train (and one of its highest-priced) is no better than mediocre; the lounge cars (33022 and 33012) are rolling junk–blistered paint and tattered finishes inside, plus gouged and unclean windows. The sleepers rattle like 30-year-old 10&6s, and could be steam-cleaned, inside and out. The non-fan traveler takes a lesson from this. I fly a lot, and commercial airliners are nothing to write home about, but they do get cleaned periodically. 4. BNSF dispatching once again was near-perfect. In 2000 miles of running, I saw only one slightly-blown meet (a freight was plugging a down-line siding that otherwise could have been used to save one Amtrak train a 25-minute wait; at the same time, Ft. Worth (dispatchers) held that freight there for what could have approached 90 minutes to get the two Amtrak trains past each other expeditiously). Other meets/overtakes saw BNSF stack trains and merchandise trains in the hole to keep the Builder moving. … And, from Dana Hawkes, Lake San Marcos, (sent from his Blackberry) “At this moment I’m on the Southwest Chief going 88 mph somewhere in Arizona. Very smooth. Food and service great. Fun! Am on my way to Chicago then on the Texas Eagle to Houston. The route to Houston drops me in Longview, Texas, then by bus to Houston. If I went to San Antonio and took the Sunset Limited to Houston it would add 17 hours to the trip.” See, if a rider studies the routes all kinds of possibilities arise. Too bad there isn’t a section of the Eagle from Longview (or Dallas) to Houston.

. . . Last words. In last month’s column we wrote of a Surfliner train being delayed for a rocket launch on Vandenburg AFP, where the tracks cross the base. RailPAC Director, Bruce Jenkins, writes that he worked on the base in the 60’s and 70s, and while a train delay today is an unusual happenstance, back then “we used to launch very frequently, and SP owned the right-of-way. We had to put ‘a hold’ on the countdown to let trains clear!” … Good news from Washington state, where the “pilot program for the Amtrak Cascades 513-516 extension to Vancouver, BC has been extended six months, presumably to see if the trains are worth running without the draw of the Olympics. … Wasn’t it interesting that in his letter to Berkshire Hathaway’s stockholders about their annual meeting that Warren Buffett ended with a P.S. “Come by rail.” Enjoy the RailPAC Los Angeles annual meeting! It will be a great one with interesting information for all rail advocates. Come by RAIL!