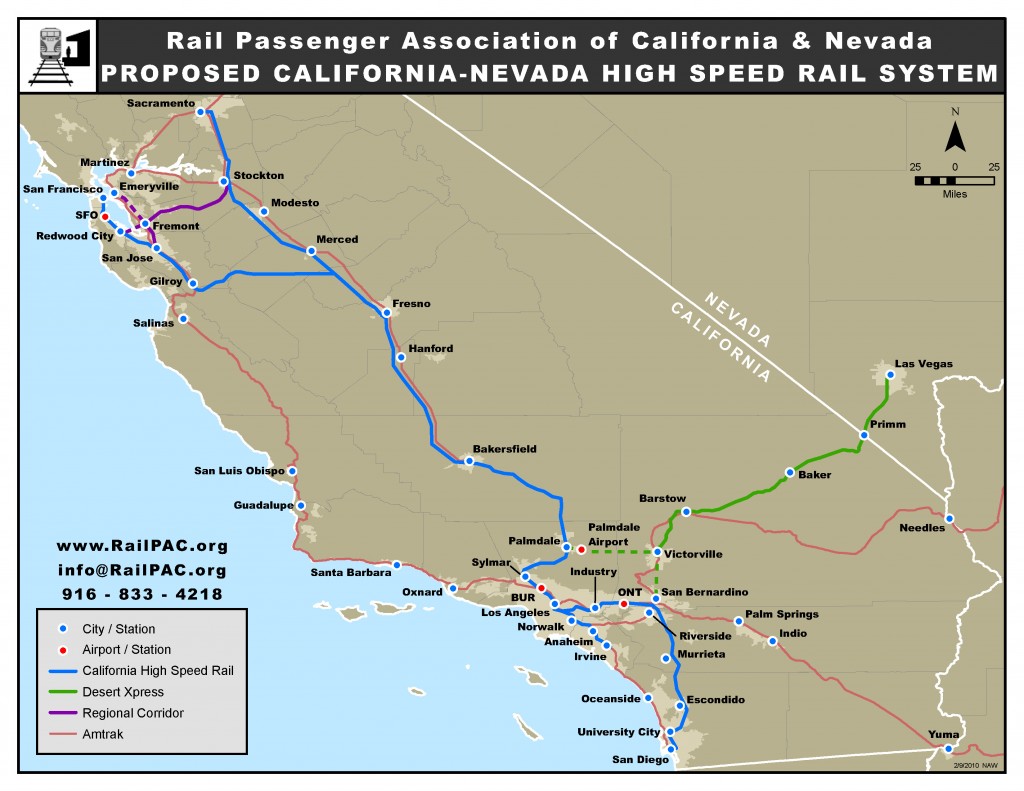 Our RailPAC/NARP meeting in Las Vegas last December revealed one important nugget.  Guest speaker, Desert Xpress (“DX”) CEO Tom Stone announced that the project team is planning to extend the Las Vegas – Victorville core route across the high desert to Palmdale where it will connect with the California High Speed Rail system.  This is excellent news for those that believe in the matrix theory of connectivity and passenger train productivity.

Let’s assume that Phase One (San Francisco-Anaheim) of CHSR is up and running as DX reaches Palmdale.  There should be a three way junction there and a Palmdale Airport stop.  This would allow an electric Metrolink service from Southern California to Palmdale Airport in addition to through trains between Las Vegas and both Northern and Southern California.  I expect there will be a total of 14 HSR stations in Phase One, for a matrix of 91 origin and destination pairs.  If we add 4 stations on the DX route the combined systems will have 17 stations and a matrix of 136.  As we all know not all stations are created equal.  Just imagine the boost a Las Vegas station would give to revenue.  In particular I believe the service will be surprisingly successful between Valley stations such as Fresno, Bakersfield and Modesto and Las Vegas.  Palmdale Airport could also handle international traffic now coming into McCarren.

There are a lot of opportunities here.  A well designed Palmdale International airport could be a great hub for tourists.  Give them a High Speed Rail pass as part of the travel package so that they could visit Las Vegas and California by train.  The present Antelope Valley line Metrolink could be superseded by an electric service sharing HSR tracks with a park and ride serving the Santa Clarita area.  This is the UK model for the east Kent commuter service which shares HSR tracks from just west of the Channel Tunnel portal into London.

Connectivity works.  How about adding the Coachella Valley, Yuma, Phoenix and Tucson to the matrix?