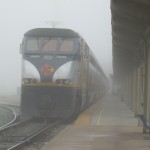 Reported by Russ Jackson, railpac.org editor, with photos by the author.
The 60 people who attended the January 16 meeting at the Rail Museum were not disappointed, even on a foggy Saturday in Sacramento. The survival and expansion of rail passenger service was on everyone’s mind, and the speakers were very qualified to discuss the current situation. 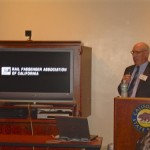 As RailPAC President Paul Dyson said at the end of the meeting, and is quoted by Noel Braymer in his meeting report which gives additional details, we “got the level of information that professionals regularly pay up to $500 to learn at industry symposiums.” Here are the headlines this reporter came away with from each speaker. The success of this meeting in Northern California should whet the appetite for the April 17 meeting in Los Angeles. 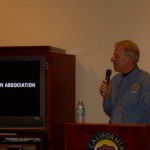 Roger Dickinson, Sacramento County Supervisor and former Chairman of the Capitol Corridor JPA. In his welcome to Sacramento he emphasized the need for expansion of the rail programs including high speed, and urged there be effort to better coordinate interconnectivity between all rail and transit programs state-wide, likewise a RailPAC objective. Mr. Dickinson introduced David Kutrosky to his new position: 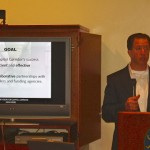 David Kutrosky, CCJPA Managing Director, making his first speech as the new Managing Director, presented his energetic ten year program of improvements, which includes more technology, more new cars, and with more cars that means there needs to be a new maintenance facility which would be built in Sacramento. Positive Train Controls will lead to faster running speeds on the Corridor, he said, up to 90 mph! 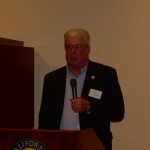 Bill Bronte, Chief of the Caltrans Rail Program, had good news, but the bad news was there will be no bond money to spend for a while. Mr. Bronte had arrived back from Washington DC the night before, and his good news was the “Fed” will be announcing how the $8B passenger rail money will be spent, in early February. He believes California will get 2B, the Midwest 2B, Florida 2B, and the Northeast Corridor will get a big chunk even though they were excluded from this fund, with the rest for everyone else. As for state rail operations, “We’re in for a bumpy road.” 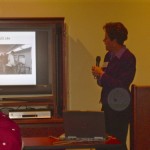 Stacey Mortensen, ACE Executive Director, discussed future plans for ACE, and her need to work to drive operating costs down. She is also working to speed up schedules for the 3 ACE trains, as they run slower on that route today than trains did 50 years ago. One plan was to purchase the line from the Union Pacific, but the UP was “not looking to sell no matter how hard we tried.” So, they are looking to build a new corridor to the Valley with direct connection to BART and the HSR program. 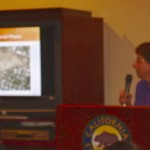 Hinda Chandler, Senior Architect, Sacramento City Transportation Department, discussed development at the Sacramento train station and is showing an aerial view of the property in this photo, which will become a transportation hub in three phases: 1) track relocation, 2) station improvements, 3) intermodal expansion. The best news, though, was there no longer is a plan to move the station building closer to the relocated tracks. Construction of Phase 1 will start this Spring. 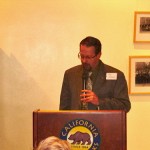 < Paul Hammond, Executive Director of the California State Rail Museum, welcomed the group to the Museum. He emphasized that the CSRM is “not just the past,” but through partnerships with agencies they work to get people to ride trains to the Museum, and they are excited about the future of passenger rail. 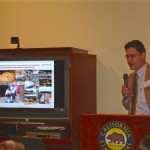 Armin Kick, Director of High Speed Rail Development, Siemens Corp., Sacramento, discussed the operations of the large assembly plant located in this city, and made clear that Siemens is not only in the light rail business, but is planning its expansion into high speed rail in this country. They already have equipped the Velaro HSR system in Spain, and plan to bid on the California High Speed Rail equipment which would be assembled in a new facility at their plant.

NOTE: We hope you enjoyed the mid-afternoon break with the Amtrak Station Hosts organization. 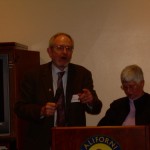 Meeting participants had an opportunity to win gifts in the end-of-meeting drawing, shown here being conducted by RailPAC Treasurer Bill Kerby and Director Marcia Johnston which included gift certificates to the Rail Museum, and daily planners from ACE (this writer was lucky to win one of these!). Thank you all! Look for a full trip report of how we traveled to Sacramento posted on www.railpac.org!